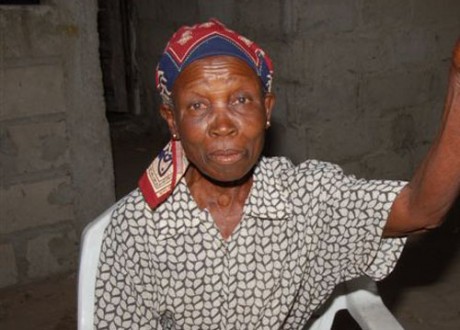 Palmira (Mozambique) - Poverty means…living without any inner peace… This is what is happening to me… it is more than I can endure.

Vivid and powerful personal testimonies deepen our understanding of poverty and motivate us to push for change, says Olivia Bennett.

The international community has committed itself to halving the number of people living in extreme poverty by 2015 via the Millennium Development Goals, and it will measure progress using a series of specific targets. Less easily measured is the relentless stress and tension of fighting for survival daily. This is something the Living with Poverty project set out to capture by means of frank and moving interviews. "Poverty means…living without any inner peace," says Palmira, a Mozambican woman in her 60s, who reminds her interviewer: "This poverty I am talking about – I am living it."

The men and women in Kenya, Mozambique , Zambia and Pakistan contributing to this project, often speak of common problems: the lack of work, the expense of education, the crippling cost of healthcare and loans, and inadequate infrastructure. Other challenges are particular to their location. In Manchar Lake, Pakistan, for example, the environmental pollution creates an extra burden, so too does the collapse of farming in Choma, Zambia. Some perspectives are deeply individual, yet shed light on wider themes.

A powerful, common thread is the stress of being poor. Edward, from Zambia, describes lying awake every night, "staring at the darkness trying to figure a way out of your predicament." Frustration is another constant emotion, with many significant examples of people encountering oppression, corruption or simple indifference. Martha in Kenya has been worn down by corrupt and time-wasting officials in charge of awarding the education bursaries which are supposed to be available for her children. She finally gave up: "You are taken round in circles until you decide to stop asking," she said.

These personal stories highlight the psychological dimensions of poverty, with some of the most powerful passages describing the shame the narrators feel at how they have to live. The reality, points out Mercy, in Kenya, is that she has had no opportunity to work or to gain skills, so she relies on paid sexual liaisons to feed her children. In her squatter settlement of more than 10,000 people, there is no latrine, a stark figure which translates into the daily humiliation of dealing with one's waste as well as that of other people. Joseph, who leads a community effort to clean up the slum is demoralised by the lack of official support, "I think the rich completely despise us," he says.

For many, poverty goes hand in hand with powerlessness. "Nobody pays any attention to us," says Nazeer in the Pakistan testimonies. He is one of several men and women who explain how poor communities are exploited by employers and traders, and are treated little better by the local politicians and officials supposed to represent their interests.

The accounts reinforce the importance of non-economic factors, such as informal social alliances and family networks, to poor people's survival. Often narrators identified the poorest of the poor as being those in their communities without family connections, and so lacking the practical and moral support this can provide. In Mozambique, years of civil war and migration to South Africa for work has eroded family cohesion, with many narrators citing the absence of parents, spouses or adult children as being a major factor in their inability to improve their living conditions. Maria, a mother of five whose husband left them to set up a new family in South Africa, says she has "no one to share her problems with and find ways of overcoming them".

These life stories show how hard it can be for the poor to take risks. Grace in Zambia says she did not dare invest even one chicken in a poultry project without being sure of a return. What at first glance appears to be a rather fatalistic approach is in fact a careful calculation of risks and benefits. Her survival strategy is so finely tuned that the slightest setback can have major repercussions. This perpetual insecurity makes it extremely hard to take up any economic opportunity which involves taking a risk or too much time.

This precariousness is vividly illustrated in stories where one event, such as illness or drought, proves pivotal in the trajectory of impoverishment, locking a family into debt, for example. Sometimes the tipping point is more individual; sometimes it can be positive. The two narrators in the Pakistan collection who managed to break the cycle of poverty did so in response to traumatic personal experience; pure economics was not the prime motivation. Salma, for example, was reacting to a bad marriage which left her determined never to be economically dependent again.

Similarly Lemaron in Kenya, disabled by polio, was unable to farm in the fields and so defied convention to become a hairdresser. He was spurred on to show he could succeed as well as any able-bodied person: "my greatest enemy is not my disability but poverty." But he acknowledges the "enemy" is pitiless: "…people here have lost hope [and] have written themselves off," he says.

Perhaps one of most striking impressions left by these interviews is the corrosive nature of chronic poverty. Many of these men and women describe how joblessness has eaten away at their self-esteem and undermined their children’s values. Mary, from Kenya, feels that if they had education and jobs, they would have much more chance of becoming "a good person". With this one comment, she illustrates the way poverty can distort people’s perceptions of themselves, and it highlights one of its most unacceptable human costs. This is the kind of insight that should speak to those working on poverty issues, and motivate them to push for stronger links between poor people’s priorities and the policies made in their name.