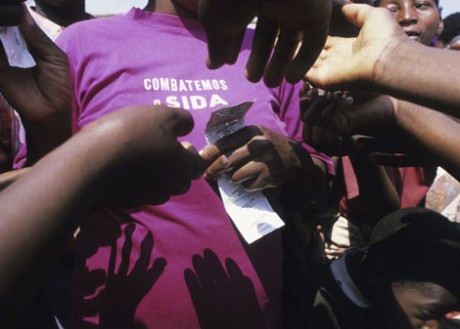 Mozambique: Condoms are distributed in the market after an educational programme on HIV/AIDS / Jenny Matthews - Panos Pictures

Around the world massive amounts of money and energy are spent on research into poverty, inequality and social exclusion. This research has much to say to the politicians and policy makers whose decisions affect our lives. It can help to identify policies that contribute to equitable and sustainable development.

Research has the potential to contribute to development but its success depends on how policy makers use the findings and who gets to know about it. Lack of access to research prevents evidence-based policy-making. To tackle this initatives have been developed to give policy makers in developing countries better access to research. Other factors, including pressure on politicians and civil servants to make decisions quickly, careerism and self-interest also play a part.

Even when research is available there are questions to be asked about how those in power decide which research to use and which to ignore.

Ideology as well as capacity

Expert voices can be found to back up most political decisions. We only have to look as far as the war in Iraq, waged in the face of mounting opposition around the world and against a backdrop of false claims from intelligence sources, to give just one example.

It is important for the public to be able to hold their decision makers to account and to do this they need access to robust evidence. The media can help them do this.

When evidence is subverted or ignored the effects are striking. In 2000 the United Nations agreed eight Millennium Development Goals (MDGs) to be achieved by 2015. Ideological controversy between member states resulted in the UN General Assembly refusing to adopt 'universal access to sexual and reproductive health' as a target. 'Universal access to reproductive health' was eventually adopted in 2006 but direct references to sexual health were dropped despite World Health Organisation research showing that unsafe sex is the second most important risk factor leading to disability, disease or death in the world's poorest communities and that cheap effective interventions exist which can easily prevent and treat sexually transmitted infections.

The development of modern democracies has gone hand in hand with the development of increasingly sophisticated methods of manipulating public opinion. The growth of the public relations industry and political 'spin' is testament to this. Governments, corporations, NGOs and even the PR industry use and commission research to add credibilty to their policy positions and campaigns, and those of their clients. In this context there is a pressing need for critical debate around development research.

The public across the world should be supported to be able to tell good and bad research apart, both in terms of its reliability – is the methodology robust – and its motives – who is funding it and why.

In the words of a Jamaican researcher interviewed by the Panos Relay programme "[they say] if the report is good it will stand on its own. But in today's world with so much noise, it doesn't." With so many competing interests fighting to be heard and research being used and commissioned for so many different reasons by so many different institutions there is a need for open and inclusive public debate around development research involving those most affected by the issues raised by research.

Media debate around research can catalyse discussion and present the feedback from audiences. It can also investigate the reality on the ground, relate the research to the policy context and bring policy-makers into contact with public opinion. Media can shape debate by focusing on an important issues not currently on the agendas of research organisations or governments. It can also build accountability by giving the public and civil society the opportunity to hold decision-makers to account.

Many journalists working in developing countries complain that researchers are unwilling to be interviewed and difficult to get hold of. Some say researchers expect journalists to understand in five minutes what has taken the researcher ten years to comprehend. In turn journalists need training to report on research accurately and fairly.

The role of editors and media owners

Editors and media owners need to provide incentives for in-depth reporting. Journalists need incentives to travel outside the main cities and find out what research means to people on the ground, especially poor and marginalised communities, often in remote areas. Researchers need to be more open to journalists and support them to understand the issues. This can only take place through a strong public interest mainstream media sector in developing countries, which is currently the best platform for reaching the wide audiences required to create meaningful public debate. For the public in developing countries to hear about and comment on this research, it is crucial countries support the growth of an independent public interest media sector by creating a supportive regulatory environment.

Although there is no automatic correlation between evidence being available and it being acted on, as long as it is in the public sphere it is much easier to scrutinise and much harder to ignore.

Joanne Carpenter is the manager of our communicating research programme.