You are here: Home » Blogs & features » Panos London Blog » The importance of communication

The importance of communication 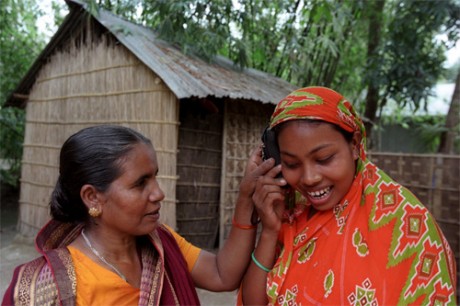 Bangladesh: A village woman is talking to her husband from the cell phone of Rabia Begum, who runs a small business where she lets villagers use her cell phone for a nominal fee / G.M.B. Akash - Panos Pictures

Murali Shanmugavelan, head of Panos London's Information Society programme, talks briefly about the role of communication technologies and their impact on citizenship in this think piece ahead of the IAMCR's 2010 conference in Braga, Portugal.

Panos London and International Association for Media and Communication Research (IAMCR) will host a session on Communication and Citizenship – Practitioner Experiences from Africa at IAMCR's 2010 conference, Braga Portugal. The opening plenary session will attract more than 500 participants around the world. This is the first time Panos London has managed to have such a huge presence in IAMCR – an international academic and policy body solely devoted to media and communication research and advocacy.

Communication flows act as the lifeblood of our societies and with 4.76 billion mobile phones in the world we have never been more connected. The explosion of communication tools and technologies has revolutionised the way people organise themselves to demand actions, and to participate in social and political institutions.

Communication technologies have a major impact on the way people rally, mobilise and organise for a common cause, challenging democracies, totalitarian governments and religious hierarchies across the world. A great example of this kind of citizenship is flash mobbing – no longer a trend only fashionable in developed countries, but one that has been evolving in developing countries to organise mass protests.

We have seen this start in the US, with the Seattle World Trade Organisation protests in 1999, one of the first large protests against a world meeting on economic globalisation. From that point on, we have witnessed technology being used as an active form of protest in the Philippines, where the use of mobile phones was used to voice opinion against fraudulent election results that led to a re-vote. It is a powerful tool and sometimes feared by authority, as in the case of the Cambodian government who, in a panic, banned SMS before elections in 2007.

These cases demonstrate clearly how people can now exercise their citizenship through communication regardless of the democracy they live in. New media can offer an alternative when other avenues are closed. It can create a public information space that circumvents the mass media as a source information and dissemination. For example, when live broadcasts in Kenya where banned by government, mobile phones replaced it for a short while. This new public space is much more decentralised, but more powerful and immediate due to its vast reach.

With the arrival of innovative communication technologies, citizenship is often invoked through use of these tools. Unprecedented opportunities now exist for citizens to challenge governments and public offices without having to go through formal channels. For example, an NGO called Daraja has implemented a project 'Raising the Water Pressure ' in Tanzania where citizens use mobile phones to put pressure on local government to address problems with rural water supplies.

However, information, communication and ICTs cannot be taken for granted in many developing societies. A major challenge in the communication revolution is that it can only be a revolution if afforded liberties and unrestricted by governments. Communication tools can question a nation's power but without political will there cannot be such affordable and locally relevant tools. There are cases where governments are still limiting technologies. For example, Kenya and Burma governments manage their SMS networks to prevent citizens from organising themselves.

The communication explosion is currently mobile-heavy and requires inclusive and representative access for all. For instance, while Africa hugely benefits from mobile phones, the communication revolution is still lagging behind. There is still some way to go when it comes to affordable and high speed internet provisions that connect people to core and uninterrupted services such as health and education in even the remotest of areas.

It is clear that the key to successful citizenship is political will, policy and infrastructure support. Ensuring that the technologies available to people are locally relevant and appropriate will genuinely transform the lives of billions in developing societies. The task before Panos London is to encourage governments, groups and individuals to harness these technologies, tools and applications. This is the only way to ensure that the communities living on the margins will always be part of the very decision making processes that affect their lives.