You are here: Home » Blogs & features » Voices from the Ground » As a teacher I had a problem fitting in

As a teacher I had a problem fitting in 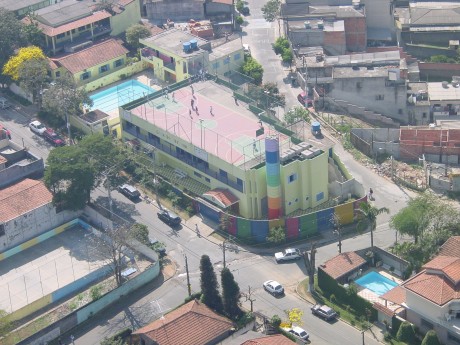 I have always been a rebel. When I moved to the south of São Paulo in the 1980s, Brazil was living under military rule. I was revolted with the lack of freedom, but also with the situation of the people. I always stood for the weakest side, the ones who are marginalized and prejudiced against.

I had moved to a nice neighbourhood called Parque Arariba, where my husband and I could enjoy the quietness and unpaved roads around the area. But the neighbourhood grew, and soon poverty and crime took over.

I was a teacher but had a problem fitting in.

I had to leave the schools that I worked for because they were not for me. Can you imagine a teacher that would climb on the desk to teach? I would.

But then the schools started sending “difficult” kids for me to take care of. We had military dictatorships all over South America. So I started taking care of exiled kids from Chile, Argentina… And also from Lebanon and Israel. At one point, paramilitary groups started executing youngsters who committed petty theft, like stealing a pen or a lighter. So I began to hide those kids. My house became a little UN.

Years later, in 1994, we founded Casa do Zezinho (or House of the little Joes) in the neighbouring area of Capão Redondo, one of the most violent in the city.

All educators here are in a constant learning process. We encourage them to use all their senses to observe the kids. It’s true! For instance, if a kid is smelling, we have to wonder if he had the chance to get a shower at home… Another one might show up wearing an overcoat in the summer, why is that? He might have been beaten up, or even sexually abused.

The Zezinhos, as we call the children, are the main focus of the Rainbow methodology that we have developed here. The kids make the rules in the classroom and educators are just a mediator between them and the knowledge. There are no definite rules, it all depends on what happens in the classroom. If there is a problem or a conflict, we all sit down and discuss it. The methodology must be flexible because everybody is different.

Six-year-old kids arrive here with a very restricted vocabulary because they are not used to conversing or being listened to. All they know is “go to hell”, “leave me alone”, “fuck off”. We teach them that fighting is only one option to deal with things and that there are many other ways.

I have a theory that most of the crime and aggressiveness in the favelas happen because of the lack of communication, lack of dialogue.

Another day, I was in Casa do Zezinho when I saw a 10-year-old-girl crying her eyes out sitting beside her younger brother. I was worried so I asked her what had happened. To my surprise they said their state school was selling a dinosaur toy for about £3. That’s why she was crying. She knew that coming from a poor family, with no father and a mother that sells pirate DVDs on the streets, she would not be able to buy one. Her mother often didn’t have money for food or clothes! Plus, she was constantly violent with the children. We had to take her to the therapy sessions we provide.

Then the little girl and her brother asked me to buy the toys for them. I told them it would not be fair since many other Zezinhos are in the same school going through the same situation. “But I won’t tell anyone,” she said. So I told her this was a matter of justice and not secrecy. How she would feel if she wanted the toy and learned that Tia Dag had given it to a colleague? “I would be very angry,” she said.

Schools should provide knowledge and dreams, should tell students “yes you can” – and not sell frustrations.

The public system in São Paulo is a complete failure. In state schools the directors don’t know the names of the kids, and teachers are not allowed to actively listen and pay attention to them. They are separated from the community and the families.

The teachers don’t understand the consequences of giving homework, for instance. If a boy can’t work it out alone, he will ask for help, but the mother is often tired of work and will say no. So next day he comes back to the school with no homework. The teacher will send a note castigating him. Then at home he will be beaten up. What will he think? “I’m only getting beaten up because of the school.” So when he turns 12, 13, he will give up.

For me education is a daily, continuous thing, that cannot be restricted to four hours a day inside four walls.