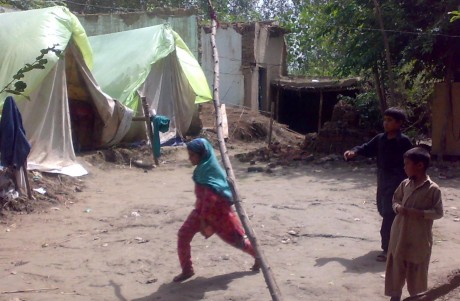 Just before the Eid holidays started at the end of Ramadan I went with my team to the flood hit areas of Nowshera to distribute food to around 1000 families we had previously selected.

It was a three-day effort and we travelled from village to village with the truck, loaded with food.

Perhaps it would have been easier to just take all the food to one place and distribute it from there, but we wanted to make sure we reached the right people, so our truck moved slowly from one neighbourhood to another.

We were giving out two kg packets of flour, two kg of sugar, two kg of lentils and a quarter kg of tea to each family we had selected from a list prepared by our community members. We tried to target households headed by women.

The first two days we covered the rural areas by the Kabul River which had been badly hit by the flooding. We had identified 700 families as needing help. The last day we toured the more urban areas in the city near the river.

I spent most of my time supervising the truck and making sure the items we had brought were given to the families listed by our relief facilitation committee. But I took some time out to visit Mirsheida, a widow in her mid 60s whose son, Tariq, has been helping us with the relief work.

Mirsheida lives in one of the narrow alleys of Nowshera city. She told me her story of the flood.

She said the water had started coming into the city so fast that it soon flooded the mosque on the corner of her street.

Tariq had quickly made the decision they should get out, and by the time they managed to get a few of their belongings together the water had come up to their necks.

She said they had barely managed to escape from their neighbourhood but succeeded in getting to higher ground in an army cantonment area nearby.

As she looked, the water seemed to be literally coming out of the ground and not just from the direction of the river.

Luckily they had some relatives living in the cantonment so they stayed with them for a week before returning home. By then water had gone down but their house was covered in mud and all their bedding, furniture and clothes were ruined.

The piped water supply has been cut off and they have had to drink water from a well nearby. I advised them to boil the water before drinking it.

Large cracks have appeared in their home and Mirsheida is now worried that the cracks might get worse. She fears her house could cave in if there is a strong earthquake or more heavy rains. It’s not an irrational fear: we had a 6.3 tremor in Khyber Pakhtunkhwa just a few days after Eid.

All the houses near the river are either partially or completely damaged. Some of the people are therefore still living in camps set up in the local schools.

The men go to work during the day and the women go to repair what is left of their homes and then they all return to the camps in the evenings.

My NGO would like to help the people with reconstruction. I wanted to explore “flood proof” designs but I have discovered that flood-proof homes don’t exist.

Perhaps these communities should not be rebuilding so near the river and should re-locate. But they really don’t have any options, so where should they go?

I am confused myself as to what to do to help these people.

I wish I had the means to re-locate them but landholdings are very expensive in Khyber Pakhtunkhwa. Also, issues of land and property rights have emerged as the flooding destroyed entire banks of the river.

I tried to relax over the Eid holidays. I spent Eid day with my sister at home in our family compound in Peshawar’s University Town area. I also spent time with my sons and it was a relaxing five-day holiday. The entire country shuts down so there was no work. After the Eid holidays, I was asked to appear on a Pushto-language radio programme on Voice of America. We discussed the trauma of children in the flood-affected areas and I talked about my own experiences with children during the relief work.

We are now hoping that some more money will come through an Irish charity called Trocaire so that we can help the minority groups of Hindus and Christians living in Medina Colony in one of the worst flood hit areas. There are around 300 families there who really need help. It is actually heartwarming to get this money from all over the world. We are a low profile NGO, but we are getting a good response. I’m very inspired – it has strengthened my faith.