You are here: Home » Blogs & features » Voices from the Ground » Kids leave school to pay gangs 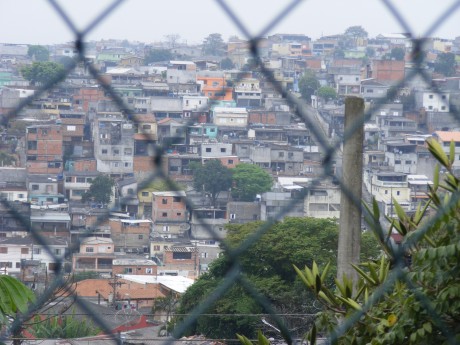 In the outskirts of São Paulo, violence is part of daily life. I have some students who have woken up with a machine gun pointed at their heads – by criminals or the police. Sometimes their parents are criminals.

It is common for us to find that a student is involved with crime. Much more common than you’d think.

Today, kids start in crime when they are 10. Either they are aviõezinhos (boys who deliver drugs to the customers), or they prostitute themselves.

We notice they are involved by the way they speak, or by their body language. Often the body speaks for them.

One day I was in my office and a Zezinho (what we call children at Casa do Zezinho) was on the phone. He just kept repeating: “Yes sir, yes sir,” and crying.

I thought, well it’s either his father or a drug lord.

I asked him if we could talk but he started walking away. I called him back and said I’d not give up on him. Who was he on the phone to?

It was his father. He is in jail, he told me. He was arrested after a robbery that went wrong. He was shot, and now he is a paraplegic. He is in jail, in a wheelchair. But he is scared that there might be a rebellion. In São Paulo jails, that means widespread violence, mattresses on fire, guards being beaten up and killed. When the police break up a prison riot, there is often a massacre. Being in a wheelchair he can’t protect himself.

Now there is something else I have to explain. About 80 per cent of the jails in São Paulo are controlled by a criminal organisation, Primeiro Comando da Capital (First Command of the Capital) or PCC. They set the rules inside the prisons; they say what can be and what can’t be done. They also control a big chunk of the crime on the streets. Prisoners pay a fee to be part of the PCC. People call it ‘the movement’.

So the kid told me: “My father needs money to pay ‘the movement’ to protect him. So he is asking me to drop out of Casa do Zezinho to work. He needs about 190 pounds per month.”

That’s about the national minimum wage. The boy is old enough now, he is 16, but he is studying and learning professional skills in courses here in the project.

I was really upset. “I will find you a job and we will manage. But I want to speak to your father,” I told him.

So I called his father in jail (they are not allowed to have cell phones but they have plenty, thanks to the protection of ‘the movement’). I told him I’d find his kid a job. But that he should be aware that his son would be working to support a criminal. I’d only help him out if he didn’t go back to crime after he left jail. I didn’t want a Zezinho to be supporting a criminal his entire life.

The father was a bit surprised, but he agreed. “I promise,” he said.

So through one of the partners we have in the project I found the boy a well-paid part-time job. Most of the salary goes to his father, but he keeps some to himself. He also changed to night school but kept coming to Casa do Zezinho.

Now he has asked for a month off to save some extra money because his father needs it. He has promised to come back right after, though. Our doors are always open to him.

People often ask me what can be done do to change things. Every kid has his or her moment. They can be brought back on track, back to the road they were following that was interrupted by crime. Out of around 10,000 kids who have been in Casa do Zezinho, I have lost 20. Some of them are in jail, some are dead. To save the other 9,980, we needed love. And we needed to keep our senses alert. Listening, smelling, touching and feeling are all very important to understand what’s going on in the life of a Zezinho.