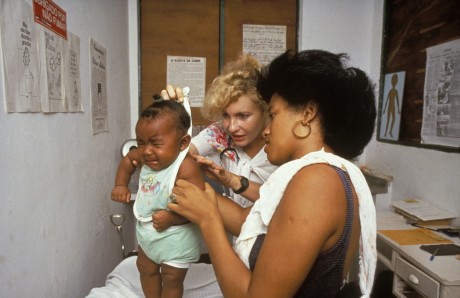 A decade ago, youngsters would start exploring sex when they were around 16 to 18 years old. Today, it is common to find kids of 13 or 14 years who have had sexual experiences or who have an active sex life that will often lead to pregnancy.

It seems everything is speeding up.

My granddaughter, who is three years old, sees the computer as a tool of her daily life and can recognise numbers and letters on the screen. When I was growing up kids learned to read when they were six or seven, with a book and a blackboard.

Maybe because of the technological progress, and the speed of information going to and fro, the dimension of time has changed – or at least our understanding of this dimension. The fact is time seems shorter. Childhood is shorter, children grow faster.

From my experience I have to say it is not only a lack of information that leads to teenage pregnancy.

For the kids who come to Casa do Zezinho, the urge to change, the desire to have a family and to break the stigma of physical and psychological violence from their own lives is decisive. And the results are often catastrophic, not only for the girl but also for the baby.

In the poor neighbourhoods, girls are not prepared and are financially unable to deal with such responsibility.

Plus, frequently the dream of a stable, loving relationship with their partner doesn’t come true and the girl is forced to face the lack of support from both the families. The baby is either abandoned or rejected. In the best scenario the baby is brought up by the grandmother, who often doesn’t have enough money. This leads to stress at home, maybe violence. So in fact, the cycle goes on.

The problem is, again, the lack of education in schools and at home. Nobody talks about sex, it’s still a taboo, but at the same time these kids in the favelas grow up hearing people having sex since kids often share the same room with their parents. They also listen to sexual musical lyrics all the time. So they want to try it, of course.

But more than that, being pregnant becomes a life project for the girls. A pregnant girl in the favela is taken care of, is looked at with respect, she feels different from the others. Of course they enjoy the extra attention.

In Casa do Zezinho very few of the girls have become pregnant. But that’s because soon enough I learned I’d have to face the problem and educate children about it.

Nowadays we have a quite uncommon but very effective programme to prevent teenage pregnancies. It’s a four-month experience we do with the class called “21st Century”, with kids between 15 and 20 years.

We randomly pick four girls and four boys to be the pregnant ones in class. They have to stay in class with a plastic belly that is successively replaced by bigger ones. And they have to do everything with that belly.

They complain a lot about the discomfort. The boys want to go play football and we discourage them, saying “you are pregnant, you can’t do that”.

Meanwhile we also discuss the experience and give them sex education. After the “baby” is born, they have to take care of the baby while still taking lessons and doing the tasks all students are supposed to do.

It works pretty well – so well that we’ve only had a couple of teenage pregnancies in Casa do Zezinho so far.