You are here: Home » Blogs & features » Voices from the Ground » Human traffickers pay off the police

Human traffickers pay off the police 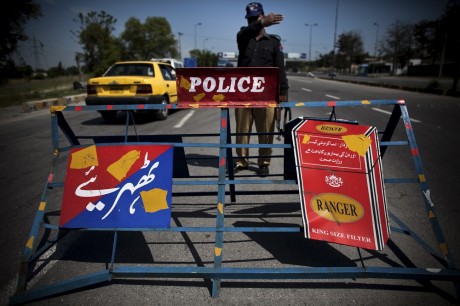 Another case my NGO is supporting these days involves a young girl who once worked for us. This is a really tragic case – the girl was abducted and killed by some Afghans who we suspect are linked to a human trafficking gang operating in Peshawar.

Kidnapping is quite common in Khyber Pakhtunkhwa province these days. There is hardly any law and order and believe me these gangs can kidnap whoever they like.

There are so many missing people – and yes, the police are involved. Even ministers in the provincial government get a cut from these gangs, we hear. They share the ransom money with them.

In this case, I think they were trying to take the girl, a 21-year-old student, to the Afghan border. She had taken a private taxi in Peshawar because she was running late for one of her university classes. We suspect the Afghan taxi driver kidnapped her and that he and an accomplice sedated her.

But somehow she fell out of the car – there was a bump on her head – and she was killed.

The young woman’s mother, who used to be a woman councillor for the local government, was traumatised by her daughter’s death. But now she wants the suspects (one of whom is in police custody) to be sentenced. We are supporting her with legal advice and trying to get her legal fees waived. The case is in the High Court now and the legal expenses are quite high.

There are witnesses in this case who are willing to come forward, but the police are not cooperating with the woman’s mother. We have reason to believe that a large human trafficking ring in Peshawar is paying off the policemen involved in this case.

The biggest problem is that no medico legal report was filed in this case. This is a legal document filled in at the nearest hospital whenever a victim is brought in for treatment or a post-mortem. Since no report was filed by a hospital and the body was buried without a post-mortem, the police are treating it as an accidental death.

A lot of young girls from Afghanistan are also sold in Pakistan. The Pakhtun community (also known as Pashtun or Pathan) has a practice of bride price, whereby the groom’s family pays the bride’s family a considerable sum of money when the marriage is arranged. This custom is exploited. Traffickers pay poor families for their daughters’ hand in marriage and then later sell these girls.

The girls end up working in a form of bonded labour without any pay or protection. Most of these girls are under the age of 20. Any man can rape them or beat them. It is a bleak situation.

As part of one our programmes, we are trying to provide training to the local police department and the hospitals on this issue of filing medico legal reports. There is an excellent one-stop crisis centre in Bangladesh and we are currently organising an exposure visit. There are other excellent centres closer to home. In Lahore, for example, the Mayo Hospital has a good medico legal department where rape victims can come for treatment and start to build their case on a medical report. Most police stations will not file these reports – instead they send the victims to the family courts. As a result many families shy away, even if the injuries are severe.

Recently a six-year-old girl was raped by a 75-year-old man in Swabi district. When the girl’s mother found out she immediately took her to the hospital and – can you believe it? – nobody would lodge an FIR (First Investigation Report) against the man. They kept discouraging her. Finally we went to the courts and they ordered the police to file a report. This is the pathetic state of our hospitals. Thank God for the courts – no one else listens to us.

Given all this tension, I’ve had little time to focus on the flood relief work which is ongoing. We are currently working on two projects funded by Trocaire and the Heinrich Boll Foundation in the flood hit areas, helping 500 and 1,200 families respectively. We are also setting up a unit that will deal with violence issues. We want to spread our support mechanisms and work on the protection of women in the flood hit areas.