You are here: Home » Blogs & features » Voices from the Ground » Crops mark end of hunger season 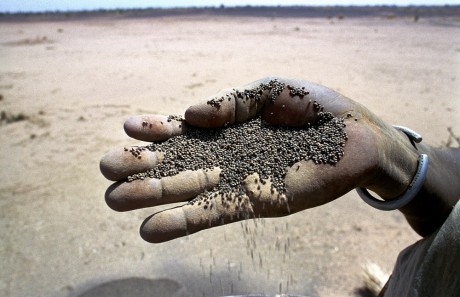 We are currently harvesting the short-cycle crops such as black-eyed peas, fonio, maize and groundnut. Their cycle is shorter than the other crops we grow, especially crops like sorghum and millet.

This time of year, every year, marks a period of happiness for the farmers. It ends the food shortage period, which can last several months and affect many families. Usually, a few months after the harvest some families begin to starve because they haven’t got enough food.

It is important to store food. We don’t grow the crops for the market. We do it for our families’ food consumption. Even if we have extra food we don’t like to sell our main crops, the cereals. They are the basis of our food.

We can make some money by selling some of our short-cycle crops, such as groundnut and fonio, because they do not play such a big role in our food security. Only a bit, though! We prefer to store the crops we produce in the granaries to get us through times of food shortages.

If you sell your produce you may face difficult times if there is a severe drought or another natural disaster on your farm. This is why we are not interested in the market.

We cannot rely on commercial crops. We had a bad experience growing cotton. Now many families have abandoned cotton growing in my village. My family’s cotton field was five hectares but the farmers now boycott cotton production despite the government appeals.

We have been discouraged by the falling price of cotton. Many people found that they couldn’t sell the cotton they produced. In addition, the loans that banks offered farmers to buy cotton seed and fertiliser were burdens they couldn’t afford to pay anymore.

It wasn’t like that in the past. Many farmers accepted growing cotton because it was a source of income. But things are changing again. This year those who resumed cotton production didn’t face the same difficulties selling what they grew. If this trend continues I will finally encourage my family to grow cotton again.

Water scarcity makes life harder for the farmers and can cause food shortages. Some families can’t grow enough crops for their food consumption all through the year but they may benefit from local solidarity. Those who have enough food may share it with them. One day a neighbour might say: “Please take these grains and make porridge for your children.”

In my village I know two or three families that face food shortages each year. I heard the government is working to combat this by creating stores in the villages where a part of the cereals produced will be kept. When food prices rise, those cereals can be sold to people at a lower price.

None of these stores exist in my village at the moment, but I think it is a good idea. Without a policy such as this rural people won’t be able to get food at reasonable prices when there are food shortages.

Obviously this does not work in the favour of the speculators and the merchants who buy food at low prices while the farmers are harvesting their crops and sell them back at a higher price months later. Some of the speculators failed because of these stores.