You are here: Home » Blogs & features » Voices from the Ground » Today we found a missing baby

Today we found a missing baby 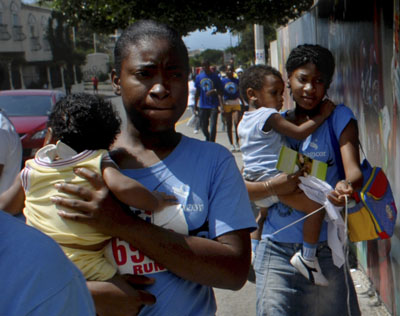 Today I found a very important baby – a baby my team and I had been trying to find for a year.

This was one of the last of the 18 HIV positive babies that had gone missing after their mothers stopped bringing them into our HIV clinic for treatment. We now only have one more child to find.

Up to 2009 we had 66 HIV positive children on our records. When I started missing some children, I checked our records and found that 18 children had missed two or more clinic appointments.

The problem is, we knew that after being placed on ARVs, the children were likely to develop resistance to first line treatment if they stopped getting the medication or if they regularly missed doses. This would mean that when we found them, they might need to be placed on second line treatment and they could develop AIDS faster as treatment options diminished.

So last year, when we confirmed that 18 of our children were no longer coming to the clinic regularly, we knew we were racing against time to save lives.

I was very concerned, and anxious for them to be found. I felt as if they were my own children that had been taken away from me.

So for the last year we have been trying to track these babies and get them back onto their ARV drug programmes. We call this the search and rescue programme.

My team and I, which includes a social worker, a pharmacist, two adherence counsellors and a nurse who assists me with research, developed various strategies to try to track, locate and encourage the mothers to bring their babies back to the clinic.

We found the last child coincidentally when the mother, who is HIV positive, gave birth to another baby that has been exposed to the virus and needed monitoring and testing to determine its HIV status. Because we had information on the older child, we encouraged her to bring the other baby back to the clinic with her.

We have had quite a few of these coincidental and accidental rescues when my social worker will recognise a parent she runs into on the street. Other times it might be that a parent becomes ill and comes to hospital for care, or is admitted, and we make the link with the missing child and follow up from there.

We found that there were a variety of reasons that the children weren’t being brought in to the clinic. For some mothers, it was life that got in the way and prevented them from taking the children in for their lifesaving medication. One HIV infected mother has a stall in the market and the day our HIV paediatric clinics are held is one of her busiest days.

She was very frank when my social worker found her at the market. When she was asked why she had stopped taking her child to clinic, she said she just couldn’t miss her sales at the market on clinic days as she needed the money to take care of her family.

Sometimes my social worker visits communities based on last known addresses that we have on file and makes discreet enquiries, but many times this leads to a dead end as the mothers may have had to leave their communities for various reasons including fear of stigma and discrimination. When that happens we have to start a whole other series of investigations while being very careful how we go about it to avoid any negative repercussions for the mothers or caregivers as well as the babies.

Interestingly, in all the cases so far, denial has not been a reason for default. We have found that reluctance to admit their HIV status and certain social issues make some mothers stop taking their children to our HIV clinic. They would take their babies to be immunised at clinics in their communities but they have to come to the hospital for HIV care and some of them are not able to explain to curious relatives, friends and even spouses why they have to keep taking seemingly healthy babies to the hospital. In other cases, some of the families live out of town and the parents or caregivers cannot afford travel costs.

The missing children were part of an adherence study my team and I had carried out at the clinic between 2004 and 2009. The study proved that strict adherence to HIV treatment regimens made the children significantly less ill. For some it led to undetectable levels of the HIV virus in the blood stream.

Our studies showed that once the HIV children were found and they recommenced ARVs their outcomes were the same as those who had not defaulted care. The only difference was that they needed second line treatment.

No other options are available after this so we can’t afford for them to default again. We work closely with the parents and caregivers to ensure they keep taking the children to the clinic and keep giving them their medication.

We now have what we call a success reaction to this search and rescue programme. This means that now we have achieved what we set out to do at the start of the programme, we are more alert for early signs of default from care and take early action to get the children back to care.

We are now more proactive, so as soon as we notice that an exposed or infected baby has missed a few clinic visits, we make calls to the parents or caregivers to find out why and begin to work to get them to resume clinic visits. They react well to this approach. We have found that it means a whole lot when we call them. They know they are missed and will know people care about them.