You are here: Home » Blogs & features » Voices from the Ground » Women have to fight for property rights

Women have to fight for property rights 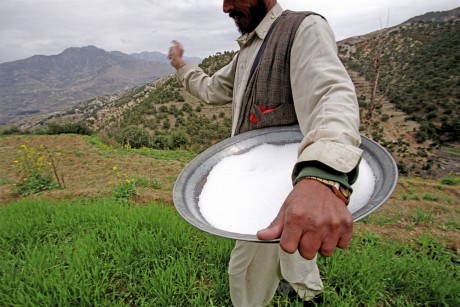 A Pashtu man tends his fields in a village near Peshawar in Khyber Pakhtunkhwa. Zubaida Noor says women in the province have to fight for their property rights / GMB Akash - Panos Pictures

There is a big issue over property rights in Khyber Pakhtunkhwa province. They don’t give land ownership to women here. Women have to fight legal battles and settle their claims through the courts. This is something I have been doing at work and in my personal life as well!

We have recently been involved in a court case over some land owned by my late husband. My father-in-law has power of attorney over 400 kanals of prime agricultural land that belonged to my husband and he was not letting us have it. The case was very emotionally draining for us as a family and we finally patched up with him in court. My father-in-law has now promised to give us some money on a yearly basis from the crops that are grown on this land. Let’s see what he does, if he implements the agreement. I have now forgiven him for what he has put us through and withdrawn the case.

My NGO’s work in the flood hit areas of Khyber Pakhtunkhwa continues – we are hoping to get some funds from the Heinrich Boll Foundation to start our housing project. We want to build homes for those who have lost everything in the floods. We have identified the Tangi tehsil (sub-district) as one of the more remote areas where aid has not reached as yet. Because it is a long way from the big towns there are no NGOs currently working there. We have also applied for USAID funding since there is a component in it for making shelters.

I have lots of thoughts of projects for the future. I have been discussing with the other women-led NGOs in Peshawar the idea of building a safe enclave for ourselves. We would all like to have our offices near each other – but this idea is at a very premature stage right now. We are looking out for opportunities though.

Last week I also took part in a local radio show that focused on women’s welfare, girl child development and basic rights. We are one of the few NGOs working on the response side – most of the others do advocacy work but we actually help victims of abuse. We feel the government should make this a priority. In Khyber Pukthunkwa, the women’s development department is not very strong. They have established a helpline for women and a child protection bureau but it is a half-hearted attempt. Their attitude needs to change. NGOs have been reluctant to work with the government but now I feel I need to work with them. How else are things going to change?

But on a happier note, this past week I have been busy with my eldest son who has been visiting from Australia. He completed his MBA in Australia and is now working in the IT sector in Brisbane. He will be going back soon and I have been spending most of my time with him.