You are here: Home » Blogs & features » Voices from the Ground » I pray 2011 is peaceful and free of killings

I pray 2011 is peaceful and free of killings 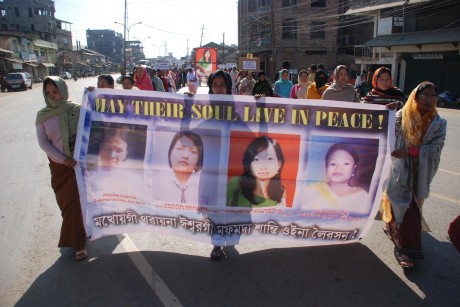 Last year was a sad year for us. It started with the gruesome gang rape and murder of a 36-year-old widow called Chanbi and her teenage daughter. Chanbi left behind two daughters and a nine-year-old son. Although there was wide public outcry, the police have been unable to find the culprits.

There were four cases of rape and murder of women in Manipur this year and I, along with other volunteers and staff in our organisation, have been constantly following up these cases to try to ensure that justice is done.

It is saddening that such incidents continue to happen despite our best efforts to spread awareness on gender issues and to curb violence against women.

In fact, two horrible and distressing incidents occurred while we were observing the International Fortnight Protesting Violence Against Women. On November 25, the day we kicked off our observation, a woman was murdered in her bed in Churachandpur district, around 70km south of Imphal, allegedly by her husband.

Then, just before our observation ended, the body of a woman who was raped and later murdered was discovered in a paddy field in the same district. The woman, who was 55, used to sell vegetables and meat in the local market.

In Manipur you will find women taking care of their families by selling everything from clothes to rice, fish and vegetables in the market.

Women sacrifice their sleep, health and food and yet their husbands beat them and take away their money. This is the real paradoxical status of Manipuri women, which we are striving to unmask and change.

Towards this end we do everything possible to spread our message to as many people as possible.

On December 19, our NGO, Women Action for Development (WAD), organised a rally in collaboration with many other like-minded groups to highlight the rising incidence of crime against women and to demand the arrest of the culprits involved in the murder of the 55-year old woman in Churachandpur.

I contacted the families of two women of the women who were murdered this year, asking them to join us in the rally. They were also happy to be part of the campaign. Unfortunately, I could not physically join the rally as my sister-in-law gave birth a day before the rally and I had to stay with her in the hospital as her attendant. But in spirit, I was with them all.

In all my prayers my one wish is that the coming year does not bring news of anyone – man or woman – lying dead in a pool of blood. Let 2011 be peaceful and free of killings.