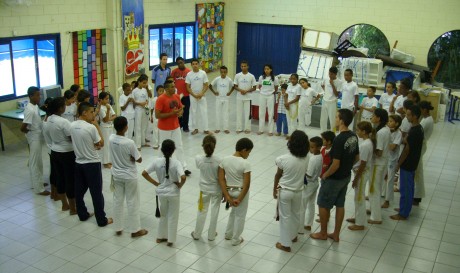 Although we work with a lot of children at the Casa do Zezinho who hail from violent backgrounds, we had never encountered serious hostility among the zezinhos [students] until this year. Unfortunately, we recently witnessed the first ever emergence of a gang-like group.

It all surfaced suddenly one January afternoon. I was at my desk when I heard the sounds of taunts outside my window. I ran outside and found fifteen students ranging in age from 15 to 21 years old forming a “human corridor” leading out the front door. With no option but to walk through the human corridor, this 14-year-old boy had just faced a line of solid kicks and punches. Why: he was a new student and a homosexual.

By the time I arrived on the scene, the boy had been beaten and had managed to run away, but I was able to catch the gang in action. They knew they were in trouble when I told them to go inside, though they continued to strut their macho swagger.

The first call of duty was to call the victim back and ask him to talk. That is how we deal with problems here: we sit in a circle and listen to each other. Of course, the victim thought his being called back was an invitation to walk right back into another gang-induced ambush, so I picked up the phone and assured him he would be safe.

While on his way back to the Casa, I spoke to the gang a bit about prejudice. Many of the boys were black, so I asked them why they either straightened their naturally curly hair or shaved their heads. I asked how they felt walking through rich areas in São Paulo, where people often look down upon them because of their appearance or dress.

How would they feel if these rich people decided to beat them up? They were quick to claim that such a scenario would never happen, so I reminded them of one of our former students whom a private guard had killed not so long ago because of an argument caused by the boy’s flip-flops and somewhat sloppy appearance.

I told them about the World Wars and how, had they been so unfortunate as to have been born in parts of Europe, they would certainly have been murdered for the mere fact of their not having been born Aryan or Christian or a member of some other elite group. They remained silent, though they hardly let down their arrogant guard. Sexist attitude runs deep, and the gang members firmly believed they had a right to punish someone for being gay.

Then the boy arrived. He was very scared, and I had to work to convince him he was safe. It was no easy feat. I cancelled all of my meetings that afternoon and sat with the group for hours: just me and the boys; no other teachers.

When the boy started talking, the mood in the room changed. He had demonstrated his bravery by just showing up, the bruises still painful. For this alone, he managed to hold the group’s attention.

He told us how he had always had trouble with schoolmates, which was why he had changed schools so frequently. He talked of how students cursed him every day, how boys looked down upon him, threatening him and ultimately beating him up.

He spoke truthfully, and I could see some of the boys’ eyes tear up. Finally, he said he did not know why he had been born a homosexual, but he certainly could not understand why this fact made people hate him so much.

I said nothing. It was after this statement that one of the bullies stood up, reached out to shake the boy’s hand and then gave the boy a hug. And without saying a word, the rest of the group followed suit, every single one offering the victim a handshake and a hug. I was proud; the change in attitude was a true testament to how we resolve problems at the Casa.