You are here: Home » Blogs & features » Voices from the Ground » Massage used as tool to break cycle of violence

Massage used as tool to break cycle of violence 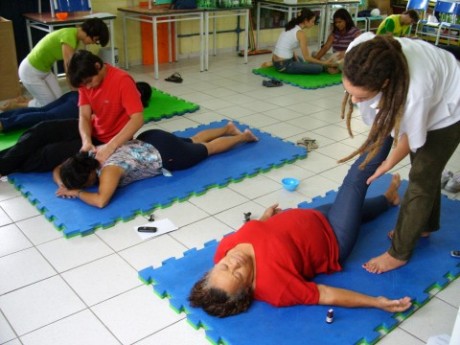 We know that domestic violence can be a consequence of the way people live in the favela. Imagine working an eight-hour shift, spending four hours a day on crowded buses and coming home to a cramped, enclosed space where the air does not flow properly and where ten people share a space that under the best of conditions should house five.

There is always loud music blasting in the favelas, so families respond by turning their own TVs on at top volume. If it is very hard to hear people talk, it is even harder to sleep. Most slum inhabitants share their beds with other family members because there are not enough mattresses to go around. For all intents and purposes, these people do not sleep; they simply collapse.

In this stressed scenario, parents frequently lash out at their children for no reason. This pressured, violent and arbitrary behaviour begins when children are young and weak, when they cannot defend themselves, so they take it quietly.

When we see children with very bad bruises or signs of heavy violence, we go to the police after talking to the parents first.

The mothers inevitably have the same reaction: first, they threaten to take their son or daughter out of the Casa; then they yell at us; finally they break down and cry, telling about how awful their life is and sharing how they, too, were beaten up as children. It is always the same story.

In order to break the chain of violence, we also now offer psychological treatment and basic relaxation therapies to our families. We call the mothers in to receive a half-hour of reflexology or a massage as a way to encourage them to talk.

The idea is that they relax and tell us what is making them nervous. Even if we cannot help them, these sessions serve as a way to help them talk about their problems, to get the emotions and stress off their chest.

We believe this helps them understand themselves and supports efforts to encourage them not to take their frustrations out so much on their kids.

We find that our multiple efforts to reduce domestic violence have had positive results. The children who have been attending the Casa for a number of years do not show as many bruises as they once did. But the new students always bring us back to reality: domestic violence against children in favelas is still a systemic problem and a solution is a long way off.