You are here: Home » Blogs & features » Voices from the Ground » In Manipur gun culture rules over all 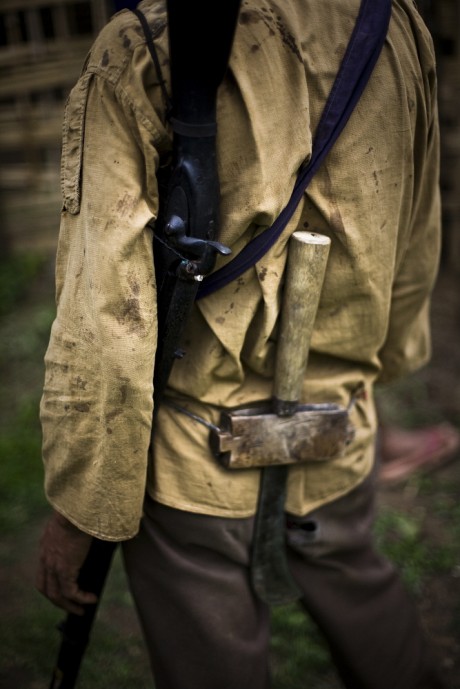 In Manipur we live in a patriarchal and conflict-ridden society dominated by gun culture. As gender activists we work against great odds to lessen the danger and injustice against our fellow women in the state. But sometimes we are struck by the realisation of our own vulnerability.

Recently we received a plea from a woman who had been admitted for treatment in the psychiatric department of the main hospital here. Her husband, a wealthy contractor, had been mistreating her and subjecting her to great domestic violence for a long time, so much so that she had become prone to depression. To escape, she went back to her mother’s house. But he came there too, threatening them with his gun.

It was after these incidents that she was admitted to the hospital for treatment. Her husband came to the hospital too and started beating her up in front of the medical staff there. We received a call from her, she was crying uncontrollably on the phone. When some of our staff went to assess the situation, she clung to us, refusing to let go.

When the hospital decided to discharge her, her husband refused to let her go back to her mother. But she herself refused to be discharged to his custody.

When we intervened, the husband and his relatives threatened us. We knew that he carried guns, and in our state, gun culture rules over all. Recently, a cabinet minister’s son had shot a youth in broad daylight for allegedly overtaking his vehicle.

The doctor hurriedly signed the discharge papers and went away saying that this was a family matter and he had no right to intervene. We argued that the woman could not be handed over to her husband where she believes her life is in danger. We called up officials from the State Commission for Women and government protection officers appointed under the Domestic Violence Act. Together, we arrived at an understanding with the hospital management that she should not be discharged into the custody of her husband. It was decided she would be moved to a swadhar or short stay home for distressed women.

Meanwhile, she was re-admitted to the hospital for further treatment. Our staff, myself included, took turns waiting on her round the clock. We were careful to keep the door to the room locked, and only opened it if we knew the person on the other side. We knew that her husband, who is not afraid to threaten or use his guns, who dares to beat up a woman inside Manipur’s biggest hospital, could come and get us anytime. We were working to help this woman safeguard her life and get justice, but at the same time we feared for our own security. This was a new learning for us which reinforced our own vulnerability in the precarious situation of the state.