You are here: Home » Blogs & features » Voices from the Ground » Suspicions aroused over high suicide rates 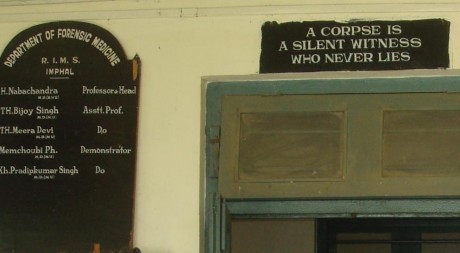 Last week women’s groups in Manipur staged protests to demand an investigation into the high number of suicides by women and murders of women. According to crime figures highlighted by Women Action for Development (WAD), the NGO I work for, there were five suicides in the first three months of 2011 alone.

Whenever we see a report in the newspaper about a woman or a child that has committed suicide, we make it a point to investigate. This is because we believe that no one would kill themselves just like that. There has to be a reason. To be more specific, often the woman is a victim of domestic violence or sexual abuse.

The role of the husband and/or family members in the death is often overlooked. What is most crucial here is scientific investigation by the police and medical departments which will give conclusive proof of whether it was suicide or murder.

One such statement of proof on which everyone believes in and depends upon is the post-mortem report. But it is questionable whether the doctors in Manipur are giving true reports and findings in their post-mortem reports.

In January last year, a woman named Sangita hanged herself near the front door of her husband’s house. All our investigations pointed towards murder. She had had a quarrel with her husband that night and the next morning, both her husband and his second wife, who also lived in the same house, had gone into hiding. There were strangulation marks on Sangita’s throat and injuries on her head as well. The very manner in which she was hung was also suspicious – she was found with her feet dragging on the ground.

The local people and Sangita’s family accused her husband of murder, but everything died down to silence when the post-mortem report concluded it was suicide. Despite our efforts, we could not garner the support of the family after that report. Needless to say, we were very discouraged and disheartened.

Earlier this month yet another woman committed suicide. She had reportedly consumed insecticide. When we went to inquire, her family members said that she had frequently told them that if anything should happen to her at her husband’s house, it would not be a case of her killing herself, she would have been murdered by her husband’s family. She was 26 and although she had been married for eight years, she had been unable to bear a child.

We tried to convince her family members to seek video coverage of the post-mortem. But before they could apply for this, one of her husband’s relatives, who is a police officer, came up and reasoned with them that since the woman was dead there is no use accusing each other. He also assured them that the post-mortem would be done fairly.

On our side, we remain doubtful of the integrity of those conducting post-mortems in face of the rampant corruption in the state. And unless those in the medico-legal department are honest and upright in their work, justice is killed before it even reaches the court-room. The lack of awareness about medico-legal aspects, as well as the need for re-sensitisation of those in the medico-legal professions, is a new area that we feel our organisation must also address to enable gender justice in Manipur.