You are here: Home » Blogs & features » Voices from the Ground » Many bomb blasts go unreported 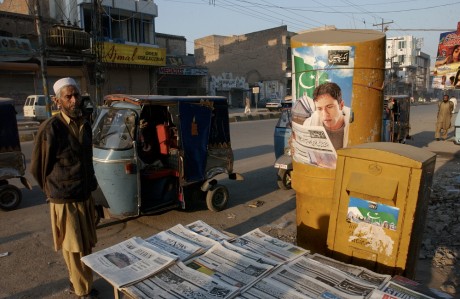 In Peshawar, things are getting worse. Every other day there is a bomb blast. If you ask me, personally I have become immune to all these terror attacks. A lot of the blasts are not even being reported in the media now.

Of course the large bomb that went off in the Khyber Market recently was reported. There were lots of injuries during this suicide attack and many young students died. There are so many sad stories that affect you… I’ve actually stopped watching TV now. There are too many negative images. Things are so bad and depressing, nothing is going well. It is also so hot these days and the heat drains all your energy.

I read recently in the newspapers that up to 80 per cent of Peshawar’s population is now suffering from some form of mental illness. This is so true – everyone I know is depressed. I just go to work and come back home; I don’t go to the bazaars anymore. Many parts of the city are sealed for days – there are too many threats. I buy my supplies from the army utility shops once a month.

As for my work with flood victims, the monsoon season is coming around soon. There was a meeting held recently for the cluster of humanitarian NGOs based in Peshawar to talk about contingency planning. I sent a staff member who was told that this year as many as six million people might be affected in expected floods.

We were also warned at the meeting to get ready for more internally displaced people because there might be an army operation in Waziristan in July to flush out the militants. They asked us how much we could help. The huge influx of IDPs will be given shelter in the towns of Kohat and Dera Ismail Khan. The villagers of Waziristan will come once the military operation starts.

Currently we are focusing on the most vulnerable families affected by the floods in Tangi. We are doing a land deal for five families and are trying to buy the land very quickly before the prices go up even further. This land is at a relative height as the floods did not touch this place last year. But we have to move soon because this land is getting very expensive. We will work out something later since we cannot afford to build the houses right now. At a later stage when we get money we will make them one room each.