You are here: Home » Blogs & features » Voices from the Ground » Human misery of drug crossroads 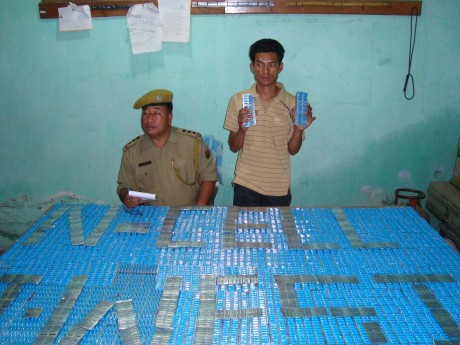 Police reveal a hoard of spasmo proxyvon, a prescription drug which addicts mix with water and inject like heroin / Anjulika Thingnam - Panos London

A popular joke among the people of Manipur is that A is for Arms, B for Bandhs (strikes), C for Curfew, and D for Drugs. This grim alphabet reflects the sad reality of the state. Tragically those that feel the impact most are women and children.

Manipur shares a porous border of almost 400km with Myanmar. Most of the arms and drugs, especially heroin, are smuggled into Manipur from Myanmar. Other abused drugs such as spasmo-proxyvon (SP) tablets are brought in from other parts of the country. These strong painkillers are usually prescribed for stomach cramps. In Manipur drug users mix the capsules with water and inject them. This produces a weak opium-like high lasting for a few minutes – but for much less money than heroin.

Generations have been wiped out in Manipur due to the abuse of heroin and SP. In fact, the high rate of HIV/AIDS in the state is mainly due to the transmission of the disease among intravenous drug-users (IDUs) who then pass it on to their sexual partners and then potentially to their children. As of January this year we have just over 38,000 people who live with HIV/AIDS, according to official figures. Roughly a quarter of them are women. Many other women, like me, struggle behind as widows of husbands who died due to HIV/AIDS.

In addition, lots of women are being used as couriers for drugs for petty amounts of money. There have been lots of cases where these women also became addicts. Many of the women who become addicts or who get infected with HIV through their spouses have been forced out of their homes. They are often forced to work as sex workers to earn their daily dose of drugs. Our society often looks with disdain at these women, but forgets that they too are victims of circumstances.

Would there be so many people abusing drugs if they were not abundantly and easily found on the streets of Manipur? Due to the ongoing armed conflict situation, Manipur must have one of the highest concentrations of state security forces in the country. There are so many checkpoints on the roads and so many policemen are recruited throughout the year. So how do these illegal drugs make their way into Manipur? How can we not suspect that there are many influential people, may be policemen or politicians, involved in the trade?

We might not have enough to prove this but the consequences of the illegal trade are quite visible. So many programmes and policies on HIV/AIDS have been framed and implemented by the government, but all these have failed to bring about perceptible signs of improvement. There is an apparent lack of political will in almost all issues in Manipur.

The state government formed the Manipur Legislative Forum on HIV/AIDS, comprising all Members of the Legislative Assembly (MLAs). Yet they failed to even evaluate how many people living with HIV/AIDS (PLHA) there are in their respective Assembly Constituencies or assess what their needs are.

We tried lobbying our own MLA to get whatever money was allotted for HIV/AIDS in his local area development fund used towards the nutrition, education and treatment of PLHA in his Assembly Constituency. But like the others, he also confined the activities to awareness programmes. There has been a lot of awareness programmes since the 1990s so I wish he had used the money in a new direction.