You are here: Home » Blogs & features » Panos London Blog » We can be proud of what we’ve achieved 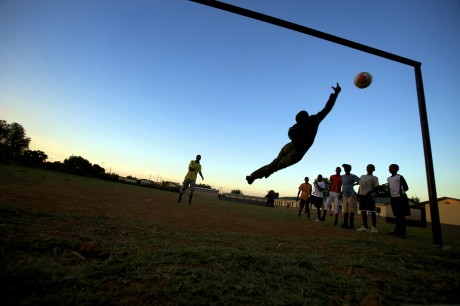 Understanding who is vulnerable and why with the Global AIDS Programme

One day in early autumn twenty-five years ago, I received a phone call from an acquaintance. Jon Tinker was on the line, wondering if I could spare two weeks of my time.  There was an international meeting that he and colleagues were organising on AIDS and they needed organisational support from someone who would not be embarrassed by the topic. At that time the disease was widely associated with homosexuality and the fact I was gay, was a part-time journalist and could speak several foreign languages meant that I could quickly undertake the necessary research.

I did not attend the meeting in Talloires, France, but the two weeks became six months and the six months turned into twenty years as I found myself drawn into what became the Panos Global AIDS Programme. During that time, my work and the organisation’s focus necessarily changed as the world’s understanding of the causes and consequences of the epidemic evolved.  We achieved many things during that time, but space allows me only to focus on a few of them.

At the start, in the late 1980s, our task was simply to raise awareness that the disease was a global threat that might affect anyone regardless of their sexual or drug-taking behaviour. Our first publication, AIDS and the Third World (a title that we would not choose today) was the only comprehensive survey of the epidemic. Its clear, objective review of the medical, epidemiological and social issues was essential reading for doctors, NGOs, journalists, activists and others wherever they worked. Between 1986 and 1989 tens of thousands of copies were published by Panos and its partners in several languages around the world. Copies can still be seen in medical libraries and it still provides an important perspective on the history of the disease.

In the early 1990s, it was clear that women were particularly vulnerable to HIV.

The key issue was – and is – the fact that many women cannot control their own sexuality. They cannot ensure that their male partners are monogamous; they cannot insist that their partners use condoms and if they or their new-borns contract HIV they have fewer opportunities to maintain their health and financial security.

These issues and others were explored in Triple Jeopardy: Women and AIDS, which became an essential introduction to the topic and also appeared in several languages.

But women are only half the human race and men’s social advantages can also leave them vulnerable.  A man’s strength often dissolves into weakness when confronted with his own sexual drive.

Panos’s research into the complex relationship between male behaviour and HIV and AIDS led to publication of a global analysis of the issue, AIDS and Men. That was followed by a series of collaborations across the world that enabled NGOs to develop programmes that responded to the particular challenges of men’s behaviour in their own communities.

From the start the AIDS Programme worked in collaboration with others. We provided a global perspective on an epidemic that had many commonalities, but which affected each community differently.

We drew on the local knowledge of our partners to put together the bigger picture, and offered our partners the global expertise that gave their work depth.  That collaboration formed the foundation of Panos’s work as an institution.

It also took me to many countries where I had the privilege of meeting and working with many individuals whose dedication to fighting HIV and whose insights into the epidemic were far greater than my own.

Panos has always been at the forefront of the response to the HIV and AIDS epidemic.  The organisation can be justly proud of what it is has achieved, particularly in collaboration with its partners around the world. I withdrew from the field of HIV and AIDS in 2006, but I will always be grateful to Jon Tinker and Panos for the opportunity it gave me to contribute to our understanding of and response to what remains a long-term threat to people’s health and happiness across the globe.