You are here: Home » Blogs & features » Voices from the Ground » “Education is very important. It opens people’s minds” 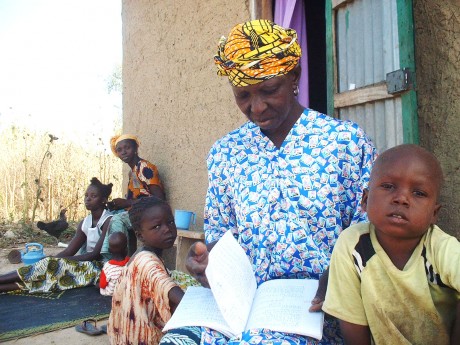 My name is Kaidia Samaké and I’m 40. I come from Gwelekoro. I’ve been living in this village for more than 30 years.

Before I was married I lived in Kabé, a village not far from here where I was born. My husband died four years ago. I have six children – four boys and two girls – but not all of them live with me. The girls are married and live in other neighbouring villages. Two of my sons live in other regions of Mali and two are working with me here in the village.

The inhabitants of Gwelekoro make a living from farming. I myself am a farmer. The main farming activity in the village is groundnut [peanut]. But much of the crop has failed this year because there was not enough rainfall in the rainy season [July to September]. The maize harvest did not have good ears. We just removed them from the fields; it wasn’t for their grain.

Meanwhile the sorghum isn’t as bad as the other staple crops this year. Thanks to recent rain some sorghum fields will give enough grain but some may not. It’s not yet the time to harvest sorghum and millet.

I didn’t go to school, but I attended adult education courses in the village. Adults’ education started 15 years ago. The village chose three women to be educated when the course first began and I was among those women. But nowadays there are many women and men who have never been to school who are attending the adult education in Gwelekoro. I’m still studying. The courses take place in the night; even this night we will study.

There about 10 women with whom I’m studying at an advanced-level. Another group of women – at a less advanced-level of knowledge – also attends classes. Our teacher is paid by some aid workers*. They recruited someone in the village and they pay him.

Adult education courses opened my mind. For instance, sometimes I have been worried about whether I could afford to pay for my children’s education expenditures. I couldn’t find the money to pay their school fees and was about to withdraw them from school. But I managed to find the money because no one knows what will happen tomorrow. If they don’t study the future will be difficult for them. If I didn’t attend these courses may be I wouldn’t understand that education is important for a child’s future.

Note from Soumaila: Kaidia couldn’t tell me whether the adult education courses in her village are financed under a government programme or an NGO. Mostly local people don’t make the distinction between government and private aid. Other villages in the area also have evening schools.