You are here: Home » Blogs & features » Voices from the Ground » School’s irrigation is fighting hepatitis 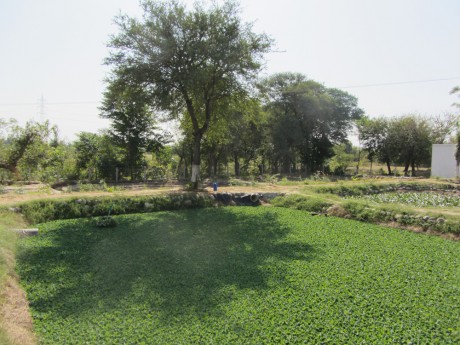 The Fazilia Trust where I teach has recently completed a UNDP funded project that uses wetlands to reclaim wastewater. Through this project, wastewater from the village is driven into a system of constructed wetlands where it is reclaimed to quality parameters and then re-used for irrigation purposes in the fields near the school.

Under this project, sanitation lines have been laid from the school’s latrines and other houses in the neighbourhood to a bioremediation facility constructed nearby on the Trust’s property. [Bioremediation is the use of microorganism metabolism to remove pollutants]. Earlier, there were open drains in this area. When it rained they would overflow and sewage mixed with rainwater would collect in the road in front of the school’s main gates. The stagnant pool of water would last for days and become a breeding ground for mosquitoes. It was especially hazardous for the younger children and older guardians who came to drop and pick up the children. There had been instances when they would fall into the dirty water.

Now the area is completely clean as all the sewage and wastewater goes into the pipes that have been laid by the Trust. The wastewater eventually ends up in the bioremediation ponds (the “wetlands”) where it is cleaned and recycled. Now there are no longer any outbreaks of hepatitis C in this neighborhood and the bad smell is gone as well.

As a result of this project, there has been a big change in the village. There is so much awareness now about the importance of keeping the roads and streets clean. All the neighbours want the project to be implemented in their areas as well – they want their open drains to be closed and for proper sanitation pipes to be installed. However, the original project only had a provision for around 200 households (including the school). Now there is talk of continuing the project through other sources of funding.

We often take our school children to visit the bioremediation facility. There is a small nursery there and children do some plantation work and learn all about fertilizers. It is good for them to see how plants grow. When I first visited the facility with other staff members we were briefed by the engineer who designed it. He told us that he is now being flooded by requests from other organisations to design similar wetlands for them! I was very impressed with the scheme. Although it has been designed on a small scale, it is such a fruitful project.