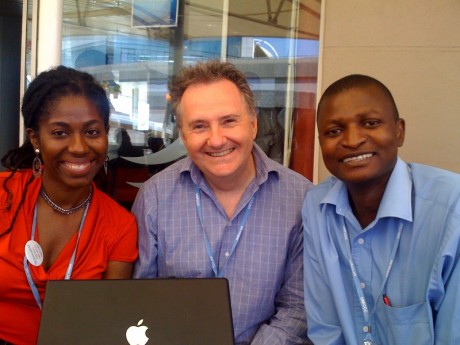 I had heard so much about the UNFCCC climate change conferences, and was curious to feel the buzz of a large international event. The COP is a major communications event, with the world media in attendance, and the large international not-for-profits whipping up pre-conference reports, cross-continent caravans and campaigns. I had been warned to expect utter exhaustion by the end of our trip where we had to organise an orientation day, 12 breakfast briefings, a media clinic, and to mentor 20 journalists from 15 countries.

It was tiring, but mainly because of the length of days. Any reasonably priced hotel was a 45-minute bus ride from the centre, so in order to catch journalists before a 9am interview, we had to be available in the lobby from 7am until the last had set off to catch up on progress of their reports and troubleshoot any problems they had. Reports came in early evening – so we were editing until 7pm or later and then caught the free transport back to the hotel.

However, the pleasant coach journey along the increasingly urbanised Durban coast gave me a useful perspective of what was happening. The coach took a route, that, like Peer Gynt’s onion allowed the mind to peel back what was going on. On the outer edges of town the hotel’s nearest bus stop was located in the largest shopping centre in the southern hemisphere. In the same way the dried onion skin gives you no indication of what lies beneath – rampant consumerism offered South African shoppers an endless array of must have disposable items and luridly and artificially coloured food – there was no climate change awareness.

The bus made a number of pick ups from other outlying hotels, and then got on with the serious business of penetrating into urban Durban. As you reached the city centre you peeled back another  layer. On the streets of downtown Durban you could see the places where 5,000 people had marched and campaigned for their climate change causes. At traffic lights locals touted promotion literature of a Vietnamese guru who promotes the concept that Veganism will stop 80 per cent of global warming to passengers in stopped cars. You passed the climate change art installations, where you could cycle up green energy for Siemens, sign a petition and write a personal message on your own bamboo wind chime.

Closer in to the conference centre you passed a roundabout with an ‘Occupy Durban’ encampment. Here a poster pointed out that 1 per cent of the world’s population were dollar millionaires, and 99 per cent less fortunate. A sombre and powerful reflection if you own a house in London, where many home-owners fall into that one per cent category.

Then the bus turned off the roundabout and hit more substantial layer. Beyond the roundabout five layers of concrete and metal fencing started to appear on either side of the road. Normal traffic disappeared and police cordons monitored any stray cab, bus or individual who did not have the COP 17 badge displayed on their person. The bus journey ended in a temporary bus station created purely by a maze of crowd control fencing. On Sunday in the park beyond the fence, a revivalist church group gathered under the trees – all dressed in white – to pray for answers to climate change. I could have gone and joined them to learn more about them, but the fencing suggested alternative routes.

Funnelled through a turnstile you emerged into a futuristic, fantasy Climate Change Expo world. It was the kind of world that only exhibitions marketing managers can concoct. Hexagonal turf structures, geodesic tent water fantasies, banana-leaf shaded eco-cafes were all there to stimulate the general public to think and learn about climate change. Delegates at this point were back among the public though this was not clear to me for several days. Perhaps this was because the tunnel entrance to this area was also controlled by volunteers. I didn’t feel as though shoppers, office workers taxi touts and bus drivers, who were working just 100 metres away were taking the opportunity in a lunch break to pop down and see what the re-organisation of their city centre was all about. The only visible members of the public that I noticed were groups of primary school children.

This was a shame, because in futuristic, fantasy Climate Change Expo world there was an opportunity for people and professionals to mingle. I attended one side event organised by a big multinational in this zone, but all attendees were professionals with a vested interest in being there. Even the pull of joining in cheer-leading routines with Ella Bella, UNEP’s Youth Ambassador, and hearing her perspectives through her enormous, plastic, green comedy glasses, failed to pull in the punters.

Some of our CCMP fellows did manage to meet up with ordinary people in this zone. But they weren’t South Africans. They were international representatives of the under-represented. Flown in by big international non-government organisations, they seemed confused and lost. Glad to meet people from their home country they confided that they had expected to return back with money for their community, instead they had been put in front of the international press’ cameras and asked to talk about climate change issues. The stories are on the CCMP website.

No member of the general public was allowed into the next layer unless they had a delegate’s badge or worked in the service industry. For the privileged few it was accessed by the usual airport routine security with boarding passes replaced by conference badges. Beyond this process the world changed. In this protected haven, the pedestrians became global, professional and cautious. Each person was colour coded. Orange badges for the media, yellow for NGOs, pink for negotiators and blue for UN staff. Passers by casually eyed your badge colour and either introduced themselves or averted their eyes. These colours clinched whether introductory conversations were opened up or closed down.

The final layer became more complex. We had reached the heart of the conference, but at the COP there was not one heart to this onion – but three!

The negotiators were allowed into the negotiation conference halls, along with a few observers officially sanctioned by their governments from global NGOs.

The media were given two press areas – one for print another for TV, which were off bounds to non-hacks.

And thirdly some groups were allowed to mingle in the corridors only.

With the badges, and the rooms it was difficult for me to see how this layered structure facilitated communication. In fairness most of our journalists did get to talk to their politicians. For some like the Chinese it was a requirement, for others like the Nigerians it was possible by printing a report in the national press saying the Nigerian delegation were nowhere to be seen. But is this the best way for the media to inform their public on what was really happening at the conference? The only easy way to break this cycle was to be friends with someone outside of the climate change circus. My former flatmate turned out to be a key UK negotiator. If I didn’t think it many colleagues instantly saw the opportunities of an old boys network moment. Surely that can’t be the most equitable or successful way of talking across professional sectors.

The project that Panos co-managed also held a press conference in the media centre where chief negotiators from several negotiating groups spoke to journalists. I had been told this was the only time when this happened in two weeks, and I didn’t quite believe it. My assumption was that the media centre would have negotiators holding a variety of press conferences daily, but it seemed most of the interview action happened informally in the corridors.

The one chance to touch reality was to brush past those allowed into the corridors (but none of the rooms). Just outside the press room the Scouts movement used a space to gether in camp fire formation. On the bus back to the hotel I met some German scouts. They had held a jamboree in summer with 200 scouts from Europe and Africa. Over two days the scouts had deliberated climate change and brought their findings to the corridors of the conference centre. So far so good. I then asked about how the scouts acted upon what they learned and how the summer camp participants got feedback after the conference? Err they didn’t. The jamboree participants had the option of following the website updates during the conference. I was unclear what all this effort was going to change, and how it would inform the scouts attending the jamboree in future.

It seemed a trap that many NGOs fell into at Durban. There was so much build up and very little follow through. The highly amusing Fossil of the Day awards – in reality were fun, youthful mud-slinging that had do nothing to move a career diplomat to a different perspective. Surely that’s the only communication change process that mattered.

If this was the one chance a year that the world came together to debate climate change, then it needs some serious rethinking. I admit as a first timer I may be unfairly representing what goes on, but a conference of this nature with 50,000 delegates is statistically bound to have many people in my position. There needs to be a much more clearly signed process that allows people to cross-fertilise ideas. I am minded to think a closed non-transparent session of negotiators, lawyers, experts and technocrats – would be more effective in the short term. Either that or the communication process and programme around conferences has to be radically re-thought by international NGOs, the media, local activists, organisers, as well as governments.