You are here: Home » Blogs & features » Voices from the Ground » The chance to perform 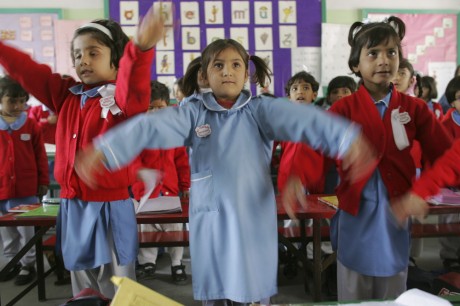 Now that the results are out for this school year, we celebrated our Annual Day (which is a public holiday in Pakistan). This year there was a big turn out by the local community. We had sent invites to all the local homes and entire families came to watch the school children perform skits and dramas. For the chief guests we had invited renowned members of the local community, such as a famous poet and a well-known barrister.

The women of the community really contributed to turning our event into a success. The mothers were fully involved in the production and came to us to ask about the costumes their children would be wearing. Even those mothers who can barely afford their children’s fees were ready to pay for their costumes! It was heartening to seem them all so enthusiastic about the event and on the big day and the audience had a great time. They enjoyed all the performances. The children also loved performing and they were all eager to get a chance to perform in front of their parents and families. We have now decided to organize a funfair in April to give those who were left out a chance to perform as well because we had to be selective for Annual Day, due to time constraints.

We had organized tents and a proper stage complete with a sound system and microphones. There were also proper seating arrangements and all of us teachers managed the show. We had 10 days of practice and guided the children on what to do on stage. The function lasted from 9am to 12.30 am. After the performances and speeches we had an award ceremony. There were prizes for the position holders and for the best sports performances (from sports week that was held last September at the school). There was also the best drawing prize from the drawing competition held in January and a prize for the most regular student (who had 100% attendance).

The government schools in our area don’t arrange such events and we are really the only private school in the area so we are happy to organize this grand function. People really look forward to it the whole year and I must say that this year’s event was very successful. So many people showed up that we had to urgently order more chairs so that everyone could be seated!

We had also set up a stall to sell books for the next session, which starts 2nd April, so a lot of parents were able to buy their children’s course books at Annual Day. Our village is very close to an army cantonment where they make ordinances, so this area is under tight security because of the threat of terrorism. All the link roads to the markets are blocked and it is difficult to get in and out of the area easily so the parents really appreciated being able to buy the books at the school premises. This year we have bought the entire stock of course text-books, including note books, so we have made life much easier for the parents.

Although we have holidays at the moment, I go to school every morning to sell the books and to have discussions with the parents who drop by. The mothers want to know what we have planned for the coming school year and I tell them that we are ready to move ahead and achieve our full potential. I might be missing out on a break from school but I am enjoying it all the same. When people appreciate you, then you feel good and find more energy!