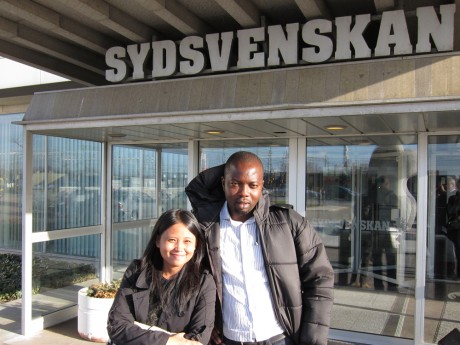 Armsfree Onomo Ajanaku has been a journalist in Lagos, Nigeria for six years and joined the Linking Southern Journalists project in 2011. He spoke to Kate Ixer about his participation in the project.

“I work with The Guardian newspaper, Nigeria’s flagship in journalism and I write features. I do everything as long as it has a human angle. My main interests are environment, infrastructure, human rights, and in Nigeria I had a lot of focus on the Niger Delta because it has been a flash point in recent years.”

“It has been amazing for me because the tradition where I come from is only to talk bottom upwards, but here there seems to be this collegial spirit in which you are very free to discuss ideas and in fact you could even disagree on a number of points. For me, that allowed me to be able to find a space for self-expression in terms of generating ideas, how the copy should be pursued. I‘m hoping that in meeting the editors, I will be able get a series of ideas I can pitch to them and work I can contribute on a regular basis. I think what Panos has done helping to build skills and capacity has not just been restricted to our countries because some of the issues are transnational. I am interested in publishing, after exploring the ideas in Nigeria I can go across West Africa.”

“The feeling is indescribable, all the while I have done journalism at a domestic level in Nigeria I never had an inkling that I was going to get published in the European media and suddenly I am in the biggest newspaper in Spain, I’m in Sweden and the kind of exposure it has given me I would not have gotten just reporting for my national media; but beyond that I think there is a way which the exposure I have gotten here has rubbed off on my work at home, it has sharpened my focus more on the human angle. For a country like Nigeria there is a lot of political reporting, but what we need is more focus on the social issues and this project has really helped.”

“Essentially style remains the same. The detail that changes is in adding some things that would make the audience in Europe actually see a vivid picture of what you’re talking about because from the training we got, they might not even know where on the map the area you’re talking about is and you just have to transport them down there by presenting real details that will help them see.”

“Within a national context, I would say they would have to focus more on the human story because I think it’s the human stories that got me this far and an understanding that you’re writing for a new audience. You have to switch mode from the national audience to a different audience. At first it is a bit challenging but eventually, with commitment, with the very fantastic personnel Panos have on the ground, I think the journalist will be able to overcome whatever difficulties he would encounter in terms of switching mode from a national Nigerian audience to a European audience.” 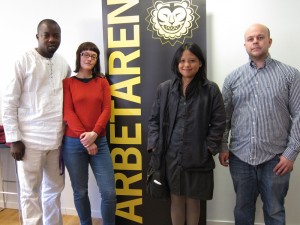