You are here: Home » Blogs & features » Voices from the Ground » ‘No alternatives’ drive HIV positive woman to sex work 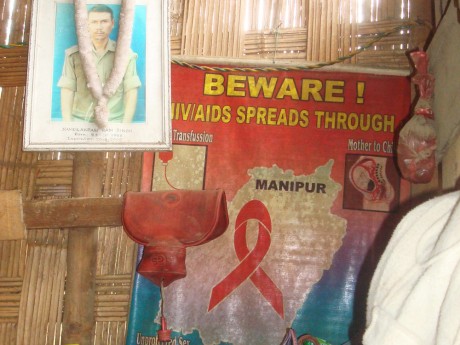 Recently one organization working in the issue of HIV/AIDS, with whom we sometimes work, referred a case to me. This was about one of their clients, Nungshi (not her real name), an HIV positive commercial sex worker with two small children. Her husband and elder son are also HIV positive.

Nunghsi’s husband has no proper or continuous means of income. He also has the habit of frequently disappearing, sometimes for months, saying that he is looking for work. This left Nungshi having to pay not only for her own medication and health, but for the children’s food and clothing as well.

Three years ago, after one such disappearance episode, Nungshi came to the main market in Imphal along with her elder son, then only six year old, to search for her husband. A neighbour had seen him loitering in the market a couple of days before. A chance meeting with a lady in a snack shop however ended with Nungshi being talked into having sexual relations with a couple of male customers that same day.

However, the money she received for her “work” bought food for Nungshi and her children for the next few days. This started her journey as a commercial sex worker, despite knowing she was HIV positive. To her it was a means of survival for herself and her children in the face of her husband’s negligence of his own duties.

One person among every four in Manipur are unemployed despite being educated. Earning avenues are also almost non-existent, with the government sector being the major employer. The situation is harder for women without resources or training and the choice is either to sell vegetables in the market, or, like Nungshi, to barter for money the only saleable merchandise that she has: her own body.

A few months ago, Nungshi’s husband came to know of her work. He beat her and threatened to kill her if she would not leave the work. However he did nothing to improve the family’s financial situation, so she continued.

HIV/AIDS and commercial sex work are closely linked in Manipur as elsewhere in the world. A significant aspect however is that in Manipur HIV/AIDS entered into the state from drug abuse, through sharing of needles by injecting drug users. Two decades after the first detection of HIV in the state, the route of transmission has shifted to the sexual route and the epidemic has entered the general populace – the wives and children at home. Also, many of the commercial sex workers in Manipur are themselves intravenous drug users who had entered the trade to fund their drug habit.

After long term counselling by Women Action for Development (WAD), Nungshi has stopped going to the city to work as a commercial sex worker. WAD has also given her training in income generation, included making washing up liquid and detergents. She was provided with raw materials and some finished products so that she could start a new life. In the meantime, we are also discussing how best to help her, by any means available to us, fulfil her desire to open a small shop near her house so that she can make a living with dignity and respect.