You are here: Home » Blogs & features » Panos London Blog » “I was filled with hope and ideas for new possibilities” 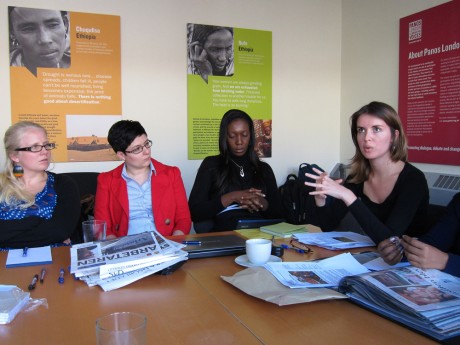 One could say it was a reaction typical from a journalist, but it took me a long time to believe the trip was true. Since the Linking Southern Journalists project coordinator Tia Jeewa first contacted me, I thought that being invited to meet editors from European newspapers – with all expenses paid – was just too good to be true.

I have been working with the project since last march. With the help of Panos team of editors, especially Lilly Peel and Anna Egan, I am proud to say that so far my features had been published in the Guardian, El Mundo, Gazeta and Svenska Dagbladet. I was now being given the chance to visit some of these newspaper’s editorial offices to learn how news is made in other countries.

During my stay, I had the chance to go to three countries. In Spain, I was struck by how large newspapers are struggling with the economic crisis. Yet, even during a time of budget cuts, they remain open to reporting on problems from other countries.

In Poland, I was overwhelmed with the historical memory the journalism keeps alive through everyday news. At Gazeta, there is one reporter who specialises in history, who reports weekly “from the past”. He writes about facts that took place decades ago in the same day of that issue. But far from a short article with quick information like we have in Brazil, they save an entire page for this so the reporter can file an in-depth look into what was happening in the country on that date.

I was struck by how the Polish are proud to remember. The story of the wars and persecutions they suffered are screaming from every corner of Warsaw. And this got me thinking about the lengths of their articles – the longest I have ever seen in daily news. Maybe this culture of remembering has something to do with the in-depth features Gazeta proudly exhibits every day. After all, how could Polish people remember if every day history is not properly told? This is a lesson I hope I never forget.

In London, besides the enriching meetings with the Panos team, there were visits to the Guardian’s editorial office. I realised how this prestigious newspaper is struggling to deal with the challenges of the Internet era just like all magazines and newspapers I know. I was impressed to hear about the range of multiple new tools the Guardian is testing in order to reach readers. And how they are willing to open their content even further, instead of restricting it to subscribers.

First, talking to the global development team, they presented us with some of these efforts, such as creating tools to help the readers search and cross-reference data in order to find new stories.

Later on, at the Guardian Open Weekend Festival, I had the chance to hear other ideas. One of the sessions took place in the conference room (where, previously that week, we had been with the Panos team to watch the morning editorial meeting). This time, there were not more than 30 people in the room, all invited to answer queries from executive director Adam Freeman, national editor Dan Roberts and digital development editor Joanna Geary.

Talking about the difficulties of making money with open content, they asked about alternatives, such as charging a higher fee for the weekend edition or charging for an edited selection of content. Most of the younger readers said they would not pay for something that is free on the Internet. A few agreed to a higher fee to have the printed edition on Sunday. But what most surprised me was what the older readers said. They cherished the paper’s values and the consistency of its investigations almost as if the Guardian was not a private enterprise, but a public or non-profit institution. They were so strongly engaged in helping the paper survive to a point that two of them said that the Guardian is already in their will!

This got me thinking about the role journalism can play in our societies and what it takes to build such credibility. This was one of the many moments during the trip when I was filled with hope and ideas for new possibilities for my future in journalism.