You are here: Home » Blogs & features » Voices from the Ground » Our government has chosen power plants over paddy 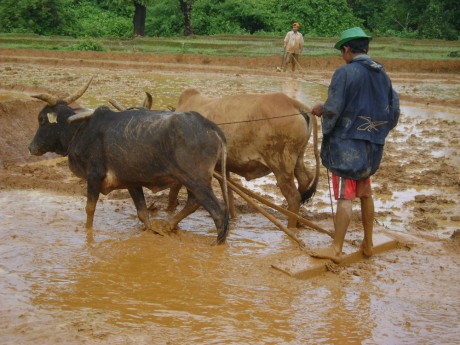 I have just returned from Janigir Champa, a district in Chhattisgarh where the government has decided to build not one or two, but 34 thermal power plants. During my tour, I saw fear and frustration on the faces of the locals who are soon to be displaced from their land as a result.

For years, displacement has been a major issue in my state Chhattisgarh. So far, several thousand tribal people have been displaced by mining projects. The minerals mined are iron ore, bauxite, limestone and dolomite. Most of these people have not been compensated properly even after years and the anger among people has fed the armed Maoist/Naxalite insurgency. The government has spent a lot of money on fighting the Maoist rebels. But displacement continues and is growing. The 34 power plants in Janigir Champa are the latest and biggest threat so far. Here is why.

The district now has a paddy cultivation area of more than 100,000 hectares. Each of these hectares produces 34 quintals of paddy [one quintal is equal to 100kg] in a single season, while in other districts the amount is only 17 quintals. Now, if you calculate two crops per year, then the amount of food that will be sacrificed is massive.

Obviously, our government is putting power production over paddy. Is this development?

Locals don’t think so. The government says that the power plants will produce 40,000 mega watts of electricity. But that will require the land of almost the entire district.

People here don’t understand why the government has to choose a live, fertile land to produce that power. They are scared for their future. The government is paying them compensation and saying that one person from each family will get a job in the power plant. But I have so far visited 17 villages and everywhere I heard the same thing:

“We are not educated enough. So all we can become are labourers. This land is our home, our source of livelihood. We live here with honour. Now, how can we become landless labourers?”

We need to help these people who are about to lose everything and have nowhere to go. Because, I feel, this is what grassroot activism is all about: defending the rights of those who are betrayed by the government itself.

So, this month, I, along with a group of other grassroot activists, have launched a new initiative called Chhattisgarh Bachao Andolan (Save Chhattisgarh movement), to fight against these power plants. We are going to organise mass protests against land acquisition and help locals protect their land. I am hopeful that this movement will both be a challenge and a success for us.