You are here: Home » Blogs & features » Voices from the Ground » Being jailed made me into a leader 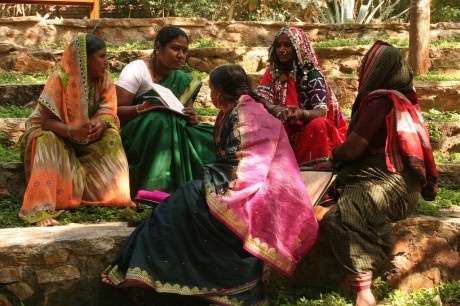 When I was 25 I went to jail for demanding jobs and civic facilities for Madigas, the Dalit community that I belong to. I was dragged into the police van by constables who pulled my hair, slapped and kicked me with their heavy boots until I passed out. I spent six months in the jail of Warangal, a district in Andhra Pradesh.

It might sound unbelievable to many, but ‘untouchability’ is practiced even among Dalits themselves. They believe that some Dalit communities are ‘higher’ than others and those who are ranked lower are treated as untouchables by the upper Dalits. As it happens, my community, the Madigas whose traditional profession has been skinning animals, tanning, cobbling and beating drums (at social events such as weddings) are considered the lowest of all Dalits [because they touch the dead bodies of cows, which are sacred in India, and other animals].

So, most of the facilities meant for the Dalits are enjoyed by only the ‘upper’ Dalits. The lower Dalits, therefore, are deprived twice: first, they are ill-treated by non-Dalits, and second, by ‘upper’ Dalits.

To remove these disparities and to get justice for all, my community appealed to the government to further categorise the Dalits into higher and lower sections, in accordance with their status within the Dalit community. We hoped to expose to the government how ‘lower’ Dalits were treated and therefore ensure their betterment.

The government did not accept the demand, so we launched a state-wide movement which continued for three long years.

As a participant in the movement, leading a group of Madiga Dalit women, every now and then I travelled to Hyderabad– a two-hour journey from my village and stood in front of the state legislative assembly, so the chief minister would listen to our demands. We did not have places to stay or even water to drink. So we stood on the road, ate on the road, drank on the road and slept on the road.

It was during these demonstrations that one day the police cracked down on us and put us behind bars.

It was a tough time; I not only sustained physical injuries, but also suffered emotionally for being in jail for six long months as my two little children lived without me. However, and it was also the time when I really felt connected to my community. I also felt proud that we, the Dalits, who did not have jobs, land or even enough food, had the courage to sacrifice all we had to ensure a better future for our children. For the first time, I felt proud to be a Dalit – people who are broken in body, but not in spirit.

Our movement was eventually successful and the government decided to classify the Dalit communities into four sub categories: A, B, C and D. My community, Madiga, received the B category while Valmiki Dalits, who clean toilets and gutters, came under category A. This meant that we would now get more opportunities at educational institutions and a larger share of government jobs than we received earlier. Soon, I walked home free and formed an all-Dalit women’s group called Telengana Mahajena Mahila Samakhya (All Dalit Women’s Association of Telengana) to fight for issues that continue to affect us such as land rights, police atrocities, and denial of civic rights.

Today the group has more than 500 members. We regularly organise street marches, meetings and sit-in protests and at each event there are risks of getting beaten by the police or being arrested. But having spent six months in jail, I came to believe that, if united, we can do more than just make a little noise – we can change the whole paradigm. It is this belief that brought out the real leader in me.