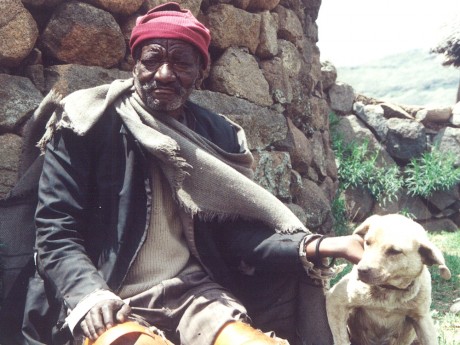 At the end of 1990s I made my first trip to mountainous, landlocked Lesotho, to set up a Panos London project to record interviews with people who were facing resettlement from their highland communities. The construction of a huge dam the following year would take over their valley; their homes, fields, gravestones and grazing lands would eventually be submerged by its water. In the interviews, the narrators seized the opportunity to describe their way of life and the fragile environment they knew so well, and share their thoughts on the resettlement negotiations and their anxieties about what lay ahead.

In the 1990s there was a growing recognition that the vast majority of those displaced by large development projects were failing to live at their same standard of living or higher (usually the stated intention). The reality was that most slid into greater impoverishment. International conferences were held, the body of research increased, and guidelines were created. Practice improved – but for a variety of reasons, including poor implementation of guidelines, many of those displaced in the name of progress still failed to thrive or even regain their former quality of life.

One of the most persistent and far-reaching effects of forced relocation is social and cultural impoverishment.

Social relations, support networks and traditional livelihoods are disrupted by relocation, and are hard to restore in different contexts. The strain of change and adaptation, and of undergoing what becomes in effect for many traditional rural communities a dramatically accelerated process of modernisation, tests social structures to their limits. Many break down.

This, combined with personal feelings of loss, anxiety and powerlessness, undermines the ability of individuals and communities to recover from displacement, to progress or take advantage of new opportunities. Yet the voices of those struggling to respond to these changes were largely absent from any discussion or debate. The aim of the Panos project was to gain greater understanding of the complex impacts of resettlement, by listening to those experiencing it first-hand, and to raise awareness of the issue – which continues to affect millions of people every year.

Resettled people tell their side of the story

Four years after my first visit I returned to Lesotho, to help organise the recording of follow-up interviews from some of the same men and women and additional narrators, most of whom had by then been resettled for several years. In between these two visits, I was involved in establishing similar projects in Botswana, Namibia, India, Pakistan, Zambia, Zimbabwe and Kenya. Local fieldworkers and the resettled people themselves were trained to do the interviewing. Altogether the project gathered 300 interviews in eight countries and 15 languages. The last of the interviews were recorded and transcribed in 2004.

Over the next few years our partners and the resettled communities drew on their interviews to communicate their concerns and experiences, gaining local and national media coverage. They produced booklets of selected extracts and held discussions with a range of groups, including representatives of the governments and organisations whose policies directly affected the narrators. The last booklet was published in December 2007.

Bringing the collections together

We knew from similar multi-country oral testimony projects that bringing the different voices and experiences together could lend weight to the material, and produce more insights than individual collections on their own. Looking at themes and concerns across the whole range of material would allow us to highlight common issues, as well as those particular to different situations and communities. So when Palgrave Macmillan expressed interest in a publication, I seized the chance to do the book that had long been waiting to be written.

Displaced: the Human Cost of Development and Resettlement brings together for the first time all the different experiences of being resettled. And while it focuses on the voices of the displaced, it also benefits from the contributions of Dr Christopher McDowell of London’s City University, who has been central to the continuing research and debate on development-induced displacement.

A record of social upheaval

My challenge in researching the book was to re-read in depth over 200 interviews, representing different timescales and types of development, as well as a variety of cultures and societies. Out of that daunting wealth of individual material, I needed to identify common themes as well as do justice to differences and contradictions, all the time weaving in the voices themselves. In addition, I was working with the English translations, so the medium through which I ‘listened’ to these narrators was the printed page — thousands of them – and not the recorded voice, which can reveal so much through tone, inflection, pace and pauses. Would I find the material as compelling and informative as I did when my visits to the resettled were fresh, and my impressions still vivid?

I need not have worried.

It was not all negative: the social upheaval opened up new opportunities, particularly for those whose societies were isolated and highly traditional. Women spoke of getting an education or a job; the landless described being able to break free from restrictive working practices and relationships.

Nevertheless, almost all narrators conveyed an enduring sense of loss – of their history, and all that was once familiar. Their skill at coaxing a living from their particular, often marginal environments – ‘the wisdom of this place’, as one man put it – had no more value. For some, elements of their identity were so intricately linked to that environment that they were lost forever: the old way of life simply could not be recreated. Even though the grief was strongest among those who had personally been resettled, it did affect later generations. People felt they had lost control over their lives, their assets, and most disturbingly for many, their children’s future. Their accounts were studded with the slow, steady and cumulative effect of powerlessness.

‘The planners planned… we are not part of the planning’

As I pored over the interviews, making notes, comparing experiences, looking out for clues and triggers for change, trying to understand in more depth what different individuals had undergone, certain narrators drew me back time and again. But the words of two people who I met right at the beginning of the project have always stood out. ‘The planners planned and we are not part of the planning.’ In this simple statement, Lipholo Bosielo summed up the devastating sense of exclusion from life-changing decisions experienced by so many of the displaced.

The other was ’Maseipati Moqhali, now passed away. She’d lived in the same mountain valley in Lesotho for most of her 80 years. She relied on long-established relationships with neighbours to keep her fields productive and share the harvest, and on small acts of support to tide her over lean times. She had never been to school, but expressed her trepidation at the thought of leaving her community in words that have never left me.

“I feel that the beat of my heart will be in the direction of this place where my life was. It will remain as a rock on my heart when I think of the place that I am being removed from…here where I have lived well.”

The psychological weight of grieving for lost places so powerfully described by ’Maseipati Moqhali continues to affect millions of people. The interviews that inform the book are snapshots in time; every narrator’s circumstances will have changed in some ways– but the experiences and emotions they described remain relevant. Every day, right now, more people are bearing the social cost of development; these stories tell us something of its impact.

Displaced: The Human Cost of Development and Resettlement by Olivia Bennett and Christopher McDowell is published by Palgrave Macmillan.

Buy the book from Palgrave.com

Buy Displaced: The Human Cost of Development and Resettlement from Palgrave.com