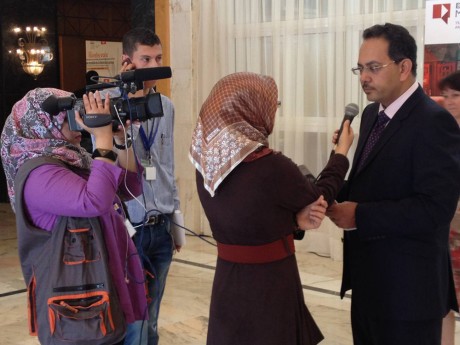 It couldn’t have been worse timing. As the world’s press freedom activists were landing earlier this month for the first day of a media freedom conference, TV magnate Nabil Karoui was convicted by the Tunisian government of blasphemy and ‘disturbing public order’ for broadcasting the animated film Persepolis, which contains a fleeting image of God.

He was fined US$1,400, yet two days later was at the conference, organised by UNESCO and the Tunisian government. This was a bit embarrassing, given the theme of the event was New Voices: Media Freedom Helping to Transform Societies. The interim Tunisian president, Dr Moncef Marzouki, himself a former journalist, was also attending the event. When asked about the verdict, Dr Marzouki said, “I think [it] is bad for the image of Tunisia. Now people in the rest of the world will only be talking about this when they talk about Tunisia.” He is not expected to stand for president in the upcoming elections.

Still, there has no doubt been change. One of the delegates told me what it was like attending the World Summit on Information Society when it was held eight years ago in Tunis. It sounded like a different country. She said the delegates were followed the whole time. One night she left a restaurant with a group of friends and asked someone they assumed to be a local man for directions to a taxi. He nodded and stopped the first car, forcing a family to get out, and turned to them and said, “There taxi!” When the WSIS delegates refused he got very angry and hustled them into the car.

Post-revolution, the country feels calm but young Tunisians are clearly frustrated by the reality of politics. Many of the Tunisian journalists I spoke to felt frustrated by the lack, or slow pace, of change. They expected faster results. They want the revolution to produce a new media law and provide more jobs within a year.

At the conference the most frustrated group were the Bahrainis. Bloggers and journalists from Bahrain attacked Al-Jazeera and other Gulf media organisations for what they said was complicity in letting the Bahraini authorities suppress demonstrators on the streets of Manama. Panel speakers from the Gulf defended themselves by saying Bahrain was ‘special’ – a comment the Bahrainis said they were sick of hearing. They wanted to make the point that the events in Bahrain were part of a national uprising, not a sectarian religious schism. They said the Arab media was not treating Bahrain like Tunisia or Egypt, yet in the Bahraini journalists’ view the situation was no different.

One of the more stimulating sessions was on media ownership and the economics of quality information. One speaker was Aboubakr Jamai, former director of the Journal Hebdomadaire in Morocco. The newspaper went out of business in 2010 faced with growing debts and an advertising boycott. He said it is unfair of international organisations to expect the media in transition countries to be transparent. That is because transition countries themselves are not yet transparent. Media that dip a toe across the ‘red lines’ learn that they must survive random state inspections, libel cases, arbitrary imprisonment of editors, withdrawal of government-sponsored advertising accounts and massive fines.

Professor Eli Noam, who lectures in finance and economics at Colombia Business School in the US, spoke in the same session. His global research project on international media concentration and ownership provided some fascinating trends. Using quantitative approaches based on market share data for major media industries in more than 20 countries over a period of about 20 years, the study showed a continual trend in the concentration of media ownership both in the North and South, but at a much more accelerated rate in the global South.

Finally Maria Leissner, Sweden’s Human Rights Ambassador, brought the delegates’ attention to a Swedo-Finnish philosopher and adamant advocate of civil liberty and scientific progress, Peter Forsskål, who was one of the first Scandinavians to travel to the Middle East. His treatise – Thoughts on Civil Liberty – laid the intellectual foundation for the world’s first freedom of information legislation: The Freedom of the Printing Press Act of Sweden, adopted in 1766. Living at a time when the UK looks to Scandinavia for ideas on social progress, it is sobering to see in this pamphlet how in 1759 the process worked in the opposite direction. While Forsskal’s thoughts are more than 250 years old, they still ring true:

“Freedom of the written word develops knowledge most highly, removes all harmful statutes, restrains the injustices of all officials, and is the government’s surest defence in a free state. Because it makes the people in love with such a mode of government.”

The idea that freedom of speech can make you love your government has substance today – just ask the Tunisians. If only more international organisations would grasp this thought and spread the love!