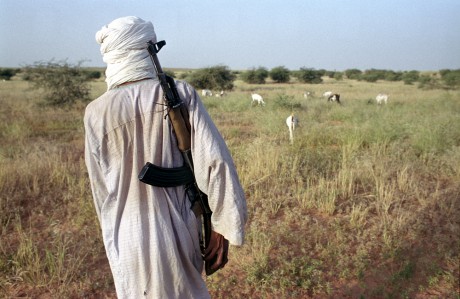 We learn from the radio that women’s rights violations are happening now in the regions the rebels are occupying in the north. Since the cities of Timbuktu, Gao and Kidal have come under the rebels’ control many women and girls are reported to have been raped. The national radio station announced that in Gao some women died trying to give birth as the city’s hospital has been destroyed.

The radio tells us of many atrocities about the rebels. People say they cut the throats of people, especially the soldiers. I believe the allegations. Sometimes eye-witnesses talk about this situation on the radio. They say there are two different armed groups in the north [the Tuareg MNLA and Ansar Dine]. One group [the MNLA] wants to create an independent state from Mali. The other one doesn’t want independence, but they want to apply Sharia law throughout the whole country.

People say they have already begun applying Sharia law in the regions they are occupying. They force women to wear clothes covering their whole bodies. They also cut the hands of thieves in public. I’m worried about these kind of laws. Here we are not used to this sort of violence. We must pray to God so that these armed groups can be stopped. They must not come to the south.

I also heard that many of those armed men come from other countries. Before the rebellion they used to abduct Westerners and they would ask for a ransom to release them. The Western countries should help Mali fight those armed groups. We cannot do it alone. We would have done it already if our army could do it alone.

This is a war on the behalf of religion. We don’t need that! I don’t understand why they want to kill people in the name of Islam. Besides, Mali is already a Muslim country. There are also Christians and those who follow ancient beliefs [animists] but most Malians are Muslim. In my village everyone is Muslim now. Here it wasn’t like that before. There were many traditional rituals in the past. Even now these traditional practices exist in neighbouring villages.

Many people became Muslim without being forced. One should not impose religion on people. If you use violence to lead people to do something you will fail. But it will be difficult to stop the armed groups. People say they have weapons that our soldiers have never seen. This is why many inhabitants of the north are fleeing toward the south. People don’t want to live with them. The new government must immediately do something for all those refugees and their children who are obliged to stop going to school.

Since Kaidia Samaké was interviewed for this blog, the National Movement for the Liberation of the Azawad (MNLA), a secular rebel group led by Tuareg separatists, and Ansar Dine, an Islamist group believed to be backed by al Qaeda’s North African wing, AQIM, have agreed to unite and turn their territory into an Islamist state. The rebel groups took over Azawad, an area the size of France, in northern Mali following a military coup in March which left army troops disorganised. A spokesman for the transitional government has rejected the rebels’ declaration of an independent Islamic Tuareg state.

The Tuareg are a Berber people with a traditionally nomadic pastoralist lifestyle. Most live in the Saharan parts of Niger and Mali but, being nomadic, there is constant movement across national borders.

The Tuareg have been demanding independence since colonial invasion of their Central Saharan homelands in the early 19th century.