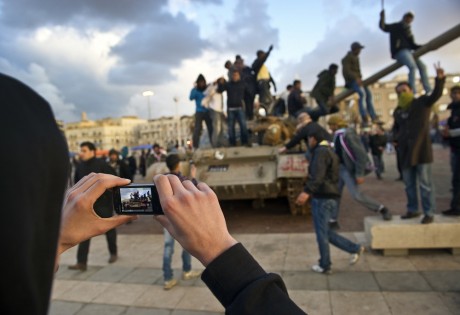 The role of Twitter, Facebook and YouTube in the Arab Spring created a renewed buzz around the use of social media and ICTs in fostering social change.

While mobile and online tools provide a way of spreading and sharing information more easily than ever before, there are still many challenges, including access, applicability and scale.

This week, for example, a study revealed that most rural Kenyans do not own mobile phones and women are less likely to own phones than men, suggesting more needs to be done to get phones into people’s hands before they can benefit from innovative apps.

Are ICTs and social media just tools in the path to social change or can they be catalysts on their own?

Tomorrow, Clodagh Miskelly, Panos London’s senior advisor for ICTs, and Tim Williams, senior advisor for media, are attending a one-day conference which will investigate to what extent ICTs can bring about social change in Africa.

ICTs, New Media and Social Change in Africa, is being organised by the University of Westminster’s African Media Centre and the Communication and Media Research Institute (CAMRI). Springboards for discussion will include the impact of citizen journalism on traditional media in Nigeria, internet regulation in Ethiopia and the impact of mobile phones in Kibera, Nairobi, Africa’s second-largest slum.

Amy O’Donnell, radio project manager at Frontline SMS, a charity which builds and distributes free and open-source software for use in development, and Cecilia Ologunagba, Nigerian News Agency (NAN) correspondent, are among the speakers, as well as researchers from universities around the world.

“There’s a pattern of enthusiasm for new tools, which we saw in the 1990s,” says Clodagh.

“But I’m concerned that people are not learning from past mistakes, such as designing tools without considering the needs and realities of their users.”

Tim reckons there is a power element that is not being openly discussed.

“The Chinese are buying into African media structures. They understand state media structures. However, given what we have learned from China’s censorship of Google, there could be an East-West clash around the internet and ICTs in Africa.”

Look out for a follow-up blog next week on what was discussed at the conference.