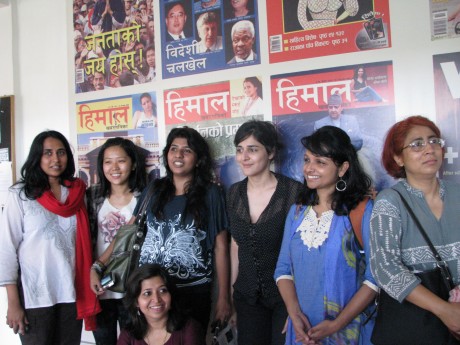 Arriving for the first time in Kathmandu is a shock to the senses – car horns honking, incense mingling with the smell of street food and women in bright saris weaving precariously through fuming traffic. Take a deep breath and you can actually taste the pollution at the back of your throat. What you’re inhaling is likely to include ‘black carbon’ – particles produced by thermal power plants, diesel exhausts and wildfires – all of which are suspected of contributing to the melting of glaciers in the Himalayas.

The subject of black carbon resonated with the South Asia Climate Change Award (SACCA) media fellows taking part in the Panos/CDKN project to improve reporting on climate change in South Asia. Journalists from Pakistan, Bhutan, India, Nepal, Bangladesh and Sri Lanka vigorously discussed whether most of the ice melting in the Himalayas was being caused by local pollution rather than international emissions.  Leading the discussion was Kunda Dixit, publisher and editor of the Nepali Times and one of the session’s trainers.

We don’t need to depend on the West to reduce emissions: solutions can be found locally, he told reporters.

So what are these solutions? And more to the point what role can the media in South Asia play in facilitating public debate around these issues? Let’s face it – climate change has not been portrayed in the media as a sexy topic, as one of the Pakistani editors rightly pointed out.

Most coverage is around carbon emissions, international negotiations, carbon trading – words that do not mean much to the Bhutanese mountain communities who lose cattle every spring due to water shortages (reported by SACCA fellow Tashi Dema of Kuensel, Bhutan’s daily newspaper). Nor does this type of reporting explore the link between changing weather patterns and the suicide of 17,368 Indian farmers, for example. The journalists discussed the fact that while some climate change reporting is becoming more technical and difficult to understand, other stories are based on alarmist findings that often do not meet rigorous research criteria (e.g. studies over long periods of time) or fail to include the views and needs of local people. Deputy editor of The Hindu newspaper, G. Ananthakrishnan warned that editors in India no longer consider climate change urgent, especially in the face of recession.

The stalemate was summed up by A.S.Panneerselvan, Panos South Asia’s executive director, “Journalists blame their editors for not giving them space to write climate change stories. Editors complain that journalists are not coming forward with good quality stories,” he explained. “So, by having them in the same room, they can’t blame each other and we have to find the real reason why climate change coverage is not up to scratch in South Asia.”

The SACCA fellows were assigned the task of making climate change reporting in the South Asian media accurate and more accessible to their readers: focusing on livelihoods rather than negotiations; making the links between climate change and health, politics and economics as well as science; reporting processes and trends instead of events and numbers.

“To have your story published on the front page, it has to dazzle me” said Tahsi Dorji, Editor of Business Bhutan. To respond to this challenge Kunda Dixit suggested the fellows make their stories more engaging by changing the way they report. His advice:

The fellows practised the art of pitching stories in a series of ‘Dragon Den’ style exercises, based on the television series in which cash-strapped entrepreneurs explain their ideas to potential investors. Just a few minutes each to dazzle a panel of international editors. “Definitely interesting especially to see how they looked at [climate change] issues, and to interact with senior editors” one of the fellows commented on the session.

To see how these stories might be put into action, the retreat ended with a field trip to the International Centre for Integrated Mountain Development (ICIMOD) Demonstration and Training Centre at Godavari, on the southern slopes of the Kathmandu Valley. Here farmers are trained and sustainable technologies and farming methods are tested, selected, and demonstrated.

Getting out of the air-conditioned room to ‘kick the dirt’ gave us an opportunity to see how the ideas from the workshop could be used to collect stories from the ground. After a long walk through a thick forest and farmlands, where we could see different methods for natural spring water harvesting, and income generation solutions such as beekeeping, journalists spoke to the Godavari Kunda Community Forest user group that works to restore woodland and conserve the forest area.

Rina Saeed Khan, Pakistani fellow writing for Dawn newspaper, took the opportunity to interview scientists at ICIMOD to inform her story on glaciers, while others agreed that seeing how sustainable projects can work to improve local livelihoods helped them to put a human face on climate change.

Over the next two years, Panos South Asia and Panos London will work together to support each fellow to produce 10 climate change stories . We will follow them as they research, write and dazzle editors with their stories and put their learning into practice.

The week-long training workshop was organised by Panos South Asia and Panos London as part of our joint CDKN project on improving the media coverage of climate change in the region.

The project seeks to address the gaps in climate change reporting in South Asia by training journalist fellows and working closely with their editors.