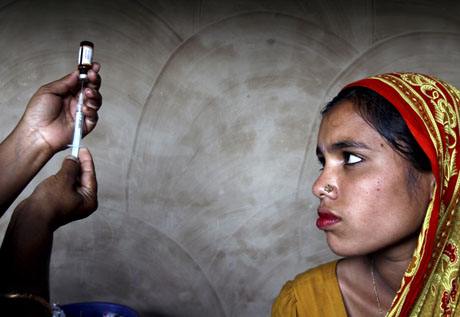 Finding a vaccine and a cure for HIV and AIDS will be the most urgent goals until 2031, experts promised on Wednesday at the AIDS 2008 Conference in Mexico City.

Debating what the future might hold for the next quarter century, Anthony Fauci – director of the National Institute of Allergy and Infectious Diseases (NIAID) – said  “The future looks bright and promising. We have accomplished a lot, but there also lie a lot of daunting challenges ahead”.

Although he admitted that researchers had been through “sobering times” when trying to find a vaccine in recent years, as many trials were discontinued or had failed, Fauci remained optimistic a vaccine will be found in the near future. “It is difficult, but it is possible,” he said.

Fauci reckoned a vaccine will be able to protect HIV acquisition in some persons and effect a slowing of disease progress in others. “The success will depend heavily on a patient’s genetic profile,” he explained.

Yet, strategising for the years ahead should not completely rely on finding a vaccine but also focus on other key aspects of the disease. Urgent attention needed to be paid to pathogenesis research, diagnosis and monitoring, therapy as well as rapid tests for TB diagnosis and drug resistance.

“We need to plan for a future with or without a vaccine,” agreed UNAIDS executive director Peter Piot.

Apart from vaccine research, the search for a cure will have to be made a priority until 2031. “We do need a cure because it is extremely unlikely that we will have the financial and logistical capacity to reach and treat for life everyone who needs therapy,” said Fauci. To date, there are no well-documented cases of an HIV-positive person being “cured”.

Fauci cautioned, however, that to become reality, a cure will require aggressive drug regimens as well as early diagnosis and treatment to eliminate HIV bio-medically. He also noted that a cure is likely to be possible only in some patients, depending on their genetic make-up.

Fauci stressed the fact that HIV prevention would remain an important issue within the next couple of decades and noted that, apart from vaccines and ART, topical microbicides was an important method in the research and development pipeline.

Aside from medical prevention methods, it will be crucially important for HIV prevention to maintain a focus on education and advocacy and to systematically change social norms. “Prevention needs to be more tailor-made to specific settings and communities to be successful,” said Piot.

If prevention strategies are implemented successfully, they “will dramatically reduce treatment need and cost by 2031,” he predicted. This was particularly important because of the growing concern about the financial sustainability of ART.

By 2031, the majority of people worldwide will know their HIV status, predicted Piot, who otherwise remained cautious about making specific forecasts. “The epidemic has always come up with new surprises. We can make predictions for the short and medium term, but cannot predict the long term,” he said.

Piot however made recommendations for issues that he felt needed urgent attention, such as competitive pricing, greater equity in treatment access, better first and second line drug regimes, as well as an effective third line regime if still necessary by 2031. There was also great need for developing a testing tool for HIV incidence, he added.

A number of issues were of particular worry to Piot. He said a growing heterogeneity in modes of HIV transmission would pose a major challenge within the next twenty years. “Transmission modes are incredibly diverse. There are many uncertainties about the future spread of HIV,” he said.

Piot was also concerned that the number of persons receiving ART remained far behind the number of new HIV infections incurred and was worried that development of drugs would not remain in step with the evolution of the virus.

“If we think it has been tough until now, consider what will come. It won’t be easy,” he warned. “We can’t predict the future, but at least we can influence it.”