You are here: Home » Blogs & features » Print features » A race to the bottom for the world’s poorest

A race to the bottom for the world’s poorest 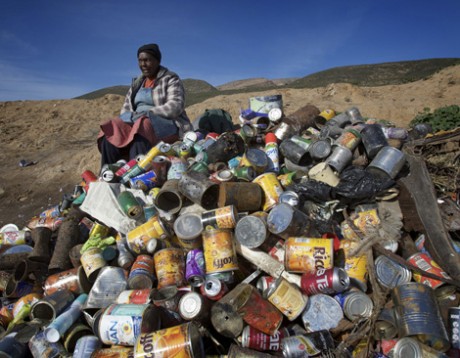 South Africa, an immigrant from Zimbabwe, scavenges through a rubbish dump outside Cape Town. A report by the WIEGO network says competition for informal work like waste-picking has increased because of the recession / Robin Hammond - Panos London

The recession has triggered a race to the bottom amongst the world’s poorest people, reports a study by Women in Informal Employment Globalizing and Organizing (WIEGO) network. The report studies 164 urban informal workers:  home-based workers, street vendors and waste-pickers in ten different countries across Africa, Latin America and Asia.

Home based workers, as well as street vendors, report facing increased competition. “About 20 women who were laid off from the factories, including a woman with a newborn baby came to ask me for some work but I have no work to give them,” says a home-based worker living in Bangkok, Thailand.

Over three quarters of urban informal workers interviewed say their income has dropped since January 2009 due to decreased demand and increased competition. Waste pickers reported a sharp fall in demand for recycled materials and a drop in the market price for recycled goods as well as reduced supplies of recyclable materials. “If I got thirty thousand pesos before, now you have to kill yourself – wake up earlier, go to bed later, be on the streets longer – to get thirty” says a waste picker in Bogota, Colombia.

The study disputes the view of many traditional economic theories, which tend to assume that economic crisis does not affect the informal economy. “Quite a lot of media attention has been given to formal economy workers,” says one of the study’s advisors, Caroline Skinner the Urban Policies co-ordinator for WIEGO, “But there has been hardly any attention on people working in the informal economy even though they are critically wired to local and national economies” she adds.

Informal workplaces are not regulated by the state and have workers no social protection, even though in developing countries, the informal economy can make up anywhere between 60 to 90 per cent of the total workforce.

Many urban informal workers in the ten countries reported feelings of frustration and uncertainty about the future.  Falling incomes and rising food and fuel prices have undermined the capacity of households to cope with the current global economic crisis.

“I have grandchildren that I look after as my children have passed away. But I am unable to provide for them. I cannot sleep at night worried about money and how I was going to provide from them,” reported a street vendor living in Durban, South Africa.

“Local and national authorities need to help informal economy workers as cumulatively, they are key players in the economy,” says Caroline Skinner.

The study argues that helping workers in the informal economy will help to ease the domino effect of an economic crisis on the wider economy.

If authorities choose to turn a blind eye, however, developing countries will find it harder to recover from recession. The study recommends policies which include organising informal economy workers, providing low-interest loans and stopping local authorities harassing informal workers.

Title: No Cushion to Fall back on; The Global economic crisis and informal workers

For additional resources on development research issues and findings, visit www.panos.org.uk/relay or email us at relay@panos.org.uk.