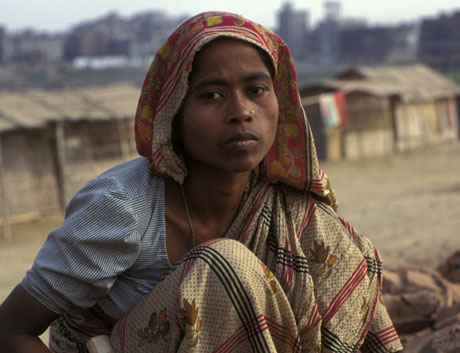 A woman in Dhaka, Bangladesh. A recent study reported that up to 5% may be suffering abuse caused by their husbands restricting their food / Peter Barker - Panos pictures

Up to five percent of women could be suffering from abuse caused by their husbands restricting their food. The extreme form of physical abuse against women has come to light in a study published by the Third World Quarterly journal this month.

“This is the first time food-related abuse has been reported,” says the study’s author, Koustuv Dalal, a Senior Health Economist at  Linköping University, Sweden. “There is a lack of understanding of the risk factors that contribute to violence against women in developing countries,” he says, “because 90 per cent of research comes from the developed world”.

Five per cent of the women questioned in the research study reported food-related abuse. Dalal believes that this figure may be higher especially in more rural parts of Bangladesh and also on the wider Indian sub-continent: “Food-related abuse is a huge social taboo so that may explain why it has not been reported previously.”

Husbands who do not have regular income, and who are thus at more risk of poverty, and subsequent anxiety, are more violent, especially regarding food restriction. The study reports that ‘restricting food is an extreme form of controlling a wife’s behaviour.’

More broadly the study reported that over three-quarters of the women interviewed had experienced verbal abuse and almost half reported that they had experienced physical abuse. The researchers used skilled and trained interviewers to collect the data. The questionnaires used were previously tested in a pilot study which assessed how best to collect sensitive information about intimate partner violence.

The study reported that in Bangladesh, economic issues such as dowry provision, demands for further payments and relationship issues such as suspicion of extramarital affairs are risk factors.

Husbands who had two or more wives are more abusive in all three categories – physical, verbal and food-related abuse. ‘They were two times more likely to become abusive verbally, physically and by stopping foods’ the study reported.

Factors such as alcohol abuse are well-established risk factors for intimate partner violence and were also found in this study.

The study found that the education levels of both victim and perpetrator are a significant risk factor. Those with higher levels of education reported lower incidences of abuse. However, irrespective of the husbands’ occupation, they were often verbally or physically abusive. The study reported that this may be part of the culturally accepted ‘normalization of violence.’

Dalal says, “These findings are important as they contribute to the knowledge for violence prevention activities that are contextually specific.” The paper recommends policies that increase women’s independence and developing a range of approaches for reducing IPV.

For additional resources on development research issues and findings, visit www.panos.org.uk/relay or email us at relay@panos.org.uk.