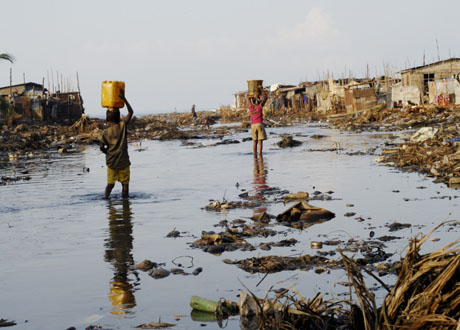 Sierra Leone’s coastal residents are being flooded year-on-year. How can this poor country afford to pay for climate change adaptation?

For the industrialised nations which are the main producers of greenhouse gases, climate change means reducing emissions so as to mitigate their effects. There is plenty of funding and the technology to help to achieve this.

Adapting to the inevitable effects of change is the other prong of the industrial world’s response. But for least developed countries (LDCs) with negligible greenhouse gas emissions, tackling climate change can be achieved only through adaptation. And that poses a dilemma for vulnerable countries like Sierra Leone.

The country lies on the tropic of Capricorn on the West African coast. The past decade has produced noticeable changes in its weather patterns. Rising sea levels were recorded as long ago as 2000. In 2005 there was a severe Harmattan wind from the Sahara, followed by the country’s worst recorded drought. Coastal areas have regularly been flooded.

Livestock washed out to sea

The low-lying settlement of Kroo Bay in Freetown is being more severely flooded with each passing year. If the rains come at night, this population of poor traders, craftspeople and retailers are flooded out of their tin shacks. Pigs and other livestock they tend are swept out to sea, property is damaged beyond repair and half a foot of mud is left in the wake of the flood waters. Each year residents try to build their homes on slightly higher ground or encroach illegally within the city.

The high tide in this estuary is 150 cm higher than it was in 1996, according to meteorological officers. This is exacerbated during the rainy seasons when the upland streams flow into the estuary. There are 32 similar slum settlements along the coastline of Freetown, home to around 150,000 of the capital’s one million residents. Wealthier people are not immune either. It is already too late for the millionaire’s mansions at Lakka on one of Sierra Leone’s most valuable tourist beaches at. They are being washed away.

The majority of the least developed countries have now drawn up a National Adaptation Plan of Action (NAPA). These plans are a key strategy of the UN Framework Convention on Climate Change (UNFCCC), and offer an opportunity for each country to receive US$350,000 in funds to embark on their most urgent adaptation priorities. It is not much, but it is a significant help when there are no resources in the national budget for adaptation activities.

But Sierra Leone, though fulfilling its obligations to the UNFCCC, remains, like most other least developed countries, short of funding. The UNFCCC member states met in the Polish city of Poznan in December 2008 to develop plans for combating climate change. For one Sierra Leonean delegate, Dennis Lansana, the country’s director of meteorological services, the negotiations fell short. “The conference was largely inconclusive,” he told me afterwards.

Dennis Lansana insists the UNFCCC had promised to support Sierra Leone to produce greenhouse gas inventories, assist in communications with the UN Secretariat, and provide pilot funding for adaptation: “Very little of this promise has materialised in Sierra Leone in recent years” he says.    At the Sierra Leone Climate Change Office, I was told that the country’s proposed adaptation projects were realistic, if only the funds could work through the UN bureaucracy. Will it be too late?

One preoccupation for a country like Sierra Leone is growing enough food. Its National Adaptation Plan of Action reflects this, and it will receive international help for its dry-area irrigation schemes, but not until 2011, when administrator of the UN adaptation funds, the Global Environment Facility, can factor it in. Everyone hopes mass starvation will not occur before then.

Arguments abound within the UN system as to whether the NAPAs are worth funding, even where the funds are available. Europe luckily is championing support for funding, particularly for its African, Caribbean and Pacific partners.

Louis Riera, the European Commission’s development head, supports the EU initiative for a Global Climate Change Alliance (GCCA) to develop vulnerable countries’ adaptation and risk management. At the COP14 in Poznan in December, he told me that adaptation should not be postponed but the plans must be better defined. “The NAPAs are wish lists, vague, with a lack of strategic framework,” he said.

Even so, Sierra Leone’s adaptation projects are low on the EU’s priority list. Vanuatu, the Maldives, Cambodia and Tanzania will be the pilot recipients from the Global Climate Change Alliance’s 2009 funding round, and 11 other least developed countries are on its 2010 list. So perhaps Sierra Leone could learn a lesson in pro-active jostling from other vulnerable countries.

The country also lacks the political will to finance climate change adaptation. This is why an NGO, the Environmental Forum for Action (ENFORAC), in 2007 held the country’s first national symposium on climate change.

The Union of Environmental Journalists and Green Scenery, both forum members, are running a conservation project with a media component. They are telling coastal and forest communities about sustainable energy, the dangers of deforestation, and the importance of forests in moderating climate change. In the words of a Jamaican meteorologist, Clifford Malu, ‘effective adaptation must involve grassroots community participation’.

The growing awareness that climate change threatens poverty reduction and other Millennium Development Goals makes it all the more vital for the poor and vulnerable to know about the dangers ahead. A vulnerable country like Sierra Leone cannot afford not to adapt. But who is listening to its call for help?