You are here: Home » Blogs & features » Print features » Afghan mothers at risk with every birth

Afghan mothers at risk with every birth 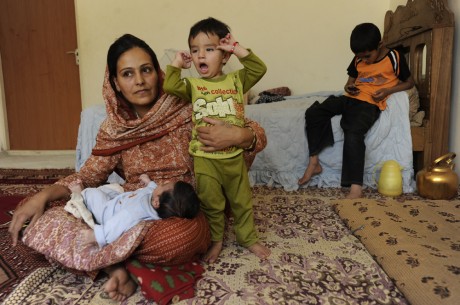 Sadia had her first child at the age of 13. Now 37, she has 11 children. Like most Afghan women she has little say in the decision-making of the size of the family or her own reproductive health. She has almost no concept that the number of children she has could be a matter of choice. Asked why she chose to have so many children, she looks confused.

“Why are you asking why I have so many children? This is according to whatever Allah has given us. It is very good. I would like to have more children.”

While Sadia, who lives in Fazelbeg in Qarabagh district, a semi-rural suburb of Kabul, has nearly twice as many children as the national average, the average fertility rate in Afghanistan is extremely high at 6.6 children per woman. It is the highest in Asia and the second-highest in the world. Frequent pregnancies, along with poor access to healthcare and inadequate nutrition, have also led to a very high maternal mortality rate. Currently 1,400 die in every 100,000 live births – the highest number in the world. Only 24 per cent of the births in Afghanistan are overseen by skilled attendants, either in a health facility or in the home. Coupled with scant pre-natal care, every delivery is a risk. The life expectancy for Afghan women is 45 years.

Ever since her first child, a daughter, was born, her life has revolved around her household, her husband and her children. She rarely goes out in public and then only with the permission of her husband. Household chores involve washing, cleaning and cooking, all done manually in her mud house. With too many chores and nine children ranging between the ages of 16 and one (her eldest daughter died and the second eldest, of 22 years, is married) demanding attention, she cannot complete all her tasks.

As in many Afghan households it is the older daughters who step in to help their mother with the household chores. Already Nadia, 16, Khumari, 14, and Najiba, 11, have daily tasks and routine responsibilities that make them look older than their years. There is no shortage of time in the day. They are considered too old to have playmates and too old to go to school although the secondary school is a mere ten-minute walk away.

“My husband said it was enough for the girls to go to school until primary class,” Sadia says.

“He said it was not appropriate for them to continue after that. No one in his family had educated their daughters beyond the primary class and he did not want to get a bad name in the family. He thought people would talk about our daughters [pejoratively] if they continued in school.”Af

The drop-out rate of girls after primary school is high in Afghanistan where economic constraints and security concerns feed into existing cultural prejudices against the education of girls. Khumari is continuing her schooling secretly, telling her father she is attending literacy classes.

Sadia herself is uneducated and has no vocation. Her frequent pregnancies and the family’s poor nutrition have taken a toll on her health. “She is very anaemic and she also has a high sugar problem and high cholesterol,” says Nabila Nangarhari, the community health worker in the area. “She needs to space the birth of her children by using contraceptives.” It is unlikely that Sadia will stop giving birth. “I have seven daughters but only three sons and my husband would like to have more sons,” she says.

One way to understand the high birth rate is to look at the social pressures on women to have children. For example, the traditional 40-day mourning period when a man dies can be shortened by one day for every son he has. This is in turn a measure of his merit and social standing. The conventional measure of clout stems from both economic and social reasons. In the past a larger number of children provided more earning potential for a family, especially within an agrarian economy, and it also ensured greater influence for the family within the community and tribe. It has been a convention that has been resistant to change. 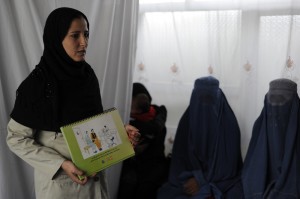 Modern birth control methods are available in some parts of the country but women do not always have the choice over whether to use them. For two years, under the persuasive intervention of Nabila, Sadia secretly took birth control pills. When her husband, who works in a shop stacking shelves, found out he took the pills to his nephew, a local mullah (religious leader), to ask his advice. “The mullah said it was a sin to practice birth control measures as it was forbidden by Islam, so my husband stopped me from taking the pills and I have become pregnant again,” Sadia recalls.

“There is no ban on measures for family planning under Islam,” says Dr Nadera Hayat Burhani, the Deputy Minister of Health. “But cultural issues and social pressure act as barriers.” Custom and tradition are often confused with religious edicts in Afghanistan and it has been an uphill battle for health professionals to break down these deep-seated beliefs. In order to do so, they are using religion as the clinching argument.

The Qur’an talks, for example, about the need for a woman to breastfeed her child for two years, a natural method of contraception that would ensure a gap of at least two years between delivery and conception. Afghan health professionals are using this as the main argument in favour of birth spacing. “It is not acceptable to talk about having fewer children, but the logic of spacing them out can be communicated,” says a health professional who did not want to be named.

“We have adopted and adapted a book on ‘Family Planning and Islam’ that was issued by the Al Azhar University of Egypt,” says Dr Burhani. The Al Azhar University, one of the most respected Islamic institutions, carries considerable weight and its pronouncements on Islamic practices would be more easily acceptable in Afghanistan. It is a method that is succeeding, albeit very slowly.

Fariba Haidari is 38 years old and pregnant with her tenth child. She is ill and the doctor has detected a heart problem. Fariba’s large number of children is due to neither social pressure nor family compulsions, but to a lack of access to contraception. 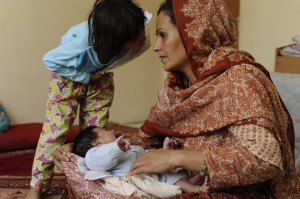 “My father had 15 children but neither he nor my husband nor my in laws have put pressure on me to have more children. We were in Iran during the civil war and I used birth control pills regularly after my sixth child. But when we returned to Afghanistan five years ago, we were living in Maidan Wardak [a central province of Afghanistan]. I had no access to any contraceptives and became pregnant again and again.”

Only a little over half the Afghan population (54 per cent) lives within an hour’s walking distance of a health facility, according to figures from the Afghan Health Ministry. This lack of access is compounded by many other factors such as a lack of qualified female medical staff, poverty and a lack of awareness.

“We are poor. We cannot buy our own house. My husband works as a driver and we have to rent our house here. I constantly have headaches and weakness. My older daughters help me run the house.”

Soraya, sitting next to her, looks envious. She has been married for three years and has not yet been able to have a child. Most married women are expected to have a child within the first year of marriage, with any delay being seen as being a problem.

“Yes, she is being treated for her medical condition, poor thing,” say the women at the shura with sympathetic glances. “We hope her problem will be solved.”