You are here: Home » Blogs & features » Print features » Afghan theatre of war comes to the stage 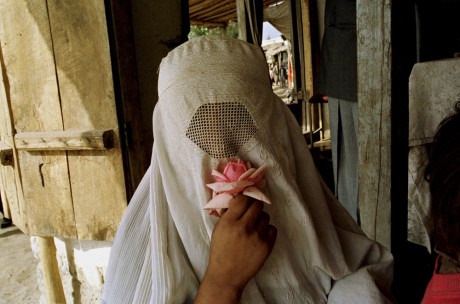 On stage, a father is pressuring his young daughter to marry an older man, a commander, to solve the family’s financial problems. The daughter resists and the father beats her; the girl’s mother intervenes and the girl threatens suicide.

This scene is not unfamiliar to an audience of Afghan women. Forced, underage marriages are a common occurrence, and tradition often trumps the law. Equally familiar is the power of “commanders”, heads of armed militia groups who have fought in conflicts but have not been disarmed, either for political expediency or because of the state’s inability to exert its authority.

This stage, where elements of Afghanistan’s wars over the last 30 years are re-enacted, is a rare forum for women to come to terms with their traumas and express their feelings. Changing the scene as it is played on the stage is a powerful step for most of the women, who have felt a lack of control in their own lives.

Despite billions of dollars of aid, Afghan institutions remain weak and corrupt. Although the government introduced a plan for “transitional justice”, which sought to recognise the sufferings of war victims, pursue justice and provide compensation, in 2007 it was overtaken by a law granting an amnesty to all those who participated in the conflict, including those accused of war crimes. This has left many Afghans feeling powerless.

Addressing a room of women – young and old, educated and illiterate, middle-class and poor – Zahra Yagana invites the audience to intervene. Encouraging them to shed inhibitions, she says;

“Come up here and tell us how you could change the situation.”

Yagana works for Qanoon Guzari, a theatre project run by the Afghan Human Rights and Democracy Organisation (Ahrdo). It tackles the issues women have to deal with: patriarchy, forced marriage, domestic violence, lack of access to jobs and divorce.

Yagana had brutal personal experience of forced marriage, domestic abuse, patriarchy and penury. Married off when she was 13 to a man she discovered later was a drug addict, she struggled with violence and debilitating poverty, working 16-hour days at a brick kiln to support her family as her husband sold off the family possessions. Most of the women in the room can relate to similar situations in their neighbourhood or their own homes.

Farida Majidi, 39, describes herself as “an uneducated housewife”. She lost several members of her family in the conflicts. One brother-in-law was killed by the mujahideen for working with the Soviet-backed government, another had his legs blown off by a mine, while two nephews were killed by unknown gunmen. After her house was hit by a rocket, the family left for Iran as refugees.

“After we returned to Kabul I stayed at home. I was too scared to go out. I was worried about what people would say about me,” Majidi says. The first day she came to the theatre workshop she didn’t want to uncover her face or talk. But the experience of the community of women, of their stories and the workshop itself, gradually gave her confidence.

“I learned many things. I now know I am brave. I can share my ideas. I decided to work making handicrafts in the house. I contribute to the family earnings, and my husband is also happy with that. He even dropped me off here today on his way to work.”

The Ahrdo certificate that states Majidi completed two weeks of training is kept at home in her safe, along with her jewellery.

Emotional trauma is perhaps the single largest unreported fallout of Afghanistan’s brutal wars. Almost every Afghan has lost a family member or has had direct experience of violence. Though an estimated 60% suffer from conflict-related post-traumatic stress disorder, mental health facilities are almost nonexistent, and social or community workers are only beginning to be trained to deal with the reservoir of anguish.

Men dominate the death totals, but it is often the survivors, the women, who have borne the brunt of the psychological and physical violence at home as a result of the conflict. Social restrictions have also made it difficult for the women to find ways to cope, including interaction with a larger social network.

Wasima Amiri is a bright young woman in her 20s who has started her own business as an entrepreneur, making jams and chutneys. Her life is relatively comfortable now, but she carries the weight of her younger years when her family was debilitated by her father’s illness, which kept him bedridden for 11 years until his death. “Before I came here I couldn’t share my feelings,” she says.

“At home we didn’t have the habit of talking. There are things you cannot talk about with your family … Here I could open up my mind and heart.”

As part of the project, women want to take the process to the government, suggesting laws that they feel could be enacted to improve their lives. “I would like the government to provide safe working places for women,” Majidi says.

“The government should make a law for building safe work areas, industries where woman can feel safe and comfortable.”

Yagana would like to strengthen the law for the elimination of violence against women. In Afghanistan custom forbids strangers, even authorities, from entering a family home. “They should make it impossible for men to inflict violence against their wives in their homes,” she says.

“The law should make it possible for the authorities to enter a home easily and take the man to prison if they know he is abusing his wife.”

Although this “legislative theatre” cannot replace government action, it offers empowerment for these women. Rather than wait for the government to do something, they are transforming their lives themselves.