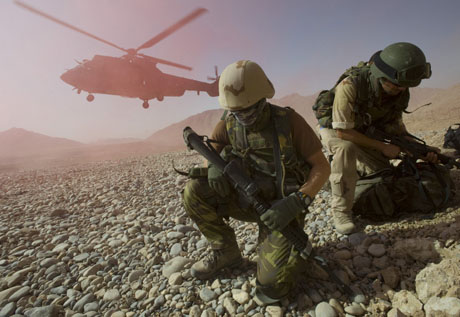 Dutch soldiers attached to the NATO force in Afghanistan. NATO's involvement with development work has led to their neutrality being questioned / Jeroen Oerlemans - Panos pictures

The French aid group Solidarites, has worked in Afghanistan for 30 years. In the dusty streets and weather-beaten compounds of Kabul, Bamiyan, and Samangan, it was common to see signs and boards advertising their development work on water and sanitation. Not any more. “We now maintain a low profile” says Hassan El Sayed, the group’s country director.

Intensifying conflict has forced aid groups to spend more money on travel and security. The Afghanistan NGO Safety Office (ANSO) says the Taliban and other armed opposition groups exert varying degrees of influence over 80 per cent of the country. This growing insecurity has made it harder for humanitarians to reach vulnerable populations.

More worryingly, say NGOs, international military forces are becoming increasingly involved in delivering aid and humanitarian assistance in a bid to win hearts and minds. “When military actors try to do things we do, then actors that would target military would target us. This forces us to be low-profile,” says Sayed. Solidarites, like many non-profit groups feels their safety and neutrality is increasingly under threat by the blurring of lines between military and humanitarian aid. “We have no branding or identity on our vehicles,” says Farhana Faruqi Stocker, the country director of Afghan Aid, “and no signs on our compounds.”

Military forces are spending money on development and humanitarian aid directly, through 26 civilian–military provincial reconstruction teams,(PRTs), the first of which was set up in 2003.These teams of military staff, diplomats, and civilian experts in reconstruction are located on military bases. Each PRT is manned by the troops of NATO countries and led by a single NATO member country.

Robert Watkins, the UN Deputy Special Representative and Resident Humanitarian Coordinator has criticised this mode of delivering aid saying it “gives the wrong signal to communities who then perceive all aid to be associated with the military.” “This has led to threats of violence against the humanitarian community and hampered their ability to deliver needed services,” he said in a press conference in Kabul last month.

When one of Solidarites’ drivers was wounded by a roadside bomb in July last year, Sayed felt sure it was not a result of direct targeting, since the NGO is well known in the area in which the accident took place. According to the Afghanistan NGO Safety Office (ANSO) NGOs were involved in 172 incidents in 2009, with armed opposition groups behind most of these. Fifty-nine NGO staff were kidnapped even though most were released unharmed. All those killed were Afghan nationals, whom ANSO says, remain more exposed than their international counterparts.

Nevertheless ANSO maintains that “the Taliban and most armed opposition groups still do not systematically target NGOs.”When NGOs have been attacked or threatened by armed groups, it has usually been a result of the perception that the NGO lacked neutrality, they say. “NGOs working in all provinces would be well served to adhere to humanitarian principles as AOG are harshly unforgiving to those who do not.”

The NATO-led International Security Assistance Force (Isaf) says it is involved in humanitarian aid in “extremis circumstances” only. Its spokesman Brigadier General Eric Tremblay says, “humanitarian aid is distributed on the basis of need and must uphold the humanitarian principles of humanity, impartiality and neutrality.”

NGOs however insist that the international military by definition cannot be seen as a neutral actor. Many NGOs have also refused to go into areas that have recently been ‘cleared’ through operations by international military forces. In a public campaign over the past year, Oxfam, Care, Save the Children UK and other international NGOs with long experience in Afghanistan have said the militarisation of aid is putting ordinary people on the frontlines of the conflict.

“Humanitarian aid has to be independent, neutral and impartial” says Hassan El Sayed of Solidarites. “Can you imagine how we would be perceived if we arrive after US tanks?” Most of the principled NGOs would not be able to go into these areas, he says.

Laurent Saillard, the Director of Agency Coordinating Body for Afghan Relief (ACBAR), an umbrella body for Afghan NGOs, agrees. “What gives the NGOs their capacity to work is the quality of their relationship with the community. What guarantees the security is not the military or their operations. This is a myth. It is complete propaganda. NGOs don’t buy it and have never asked ISAF or the US army for their security.”

The trend of donors routing aid resources to support their military strategy appears likely to continue. The British government’s Department for International Development (DFID) recently told the BBC the military and civilian efforts needed to be combined as security is such a huge problem. In its recent document on Afghanistan and Pakistan Regional Stabilization Strategy, the US government described its desire to have civilians acting as ‘force multipliers”, and it emphasised its intention to route its (aid) money through the provincial reconstruction teams in conflict zones.

“I can understand why they do it. The deployment is unpopular and the body bags are coming back” says another NGO worker, who asked not to be named. Donor countries see aid as a means of pacifying the anger provoked by military operations, but NGOs insist that they will continue to try and carve out a neutral space, however limited.