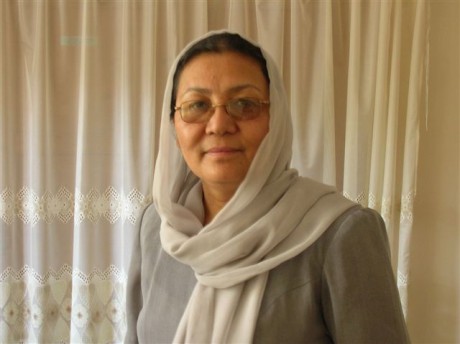 In a political landscape that is dominated not just by men but by militia commanders, leaders of the Afghan jihad and a myriad of various power brokers, Habiba Sarobi stands out. Not only is she Afghanistan’s first and only woman governor, the administrator of one of Afghanistan’s 34 provinces, but the 54-year old has no political backing or armed militias at her command. A pharmacist by profession, Sarobi has managed to survive the complex political waters of Afghanistan, becoming one of the longest serving and most successful governors in the country.

In her five years as governor, Sarobi has promoted women’s rights and representation, as well as focussing on environmental and economic issues in the province.

She has set a target for hiring women in 25 to 30 per cent of government jobs. “Currently there are only 11 per cent women, the problem is finding educated women,” she points out. Very few Afghan women have access to education, though the number of girls going to school is changing that trend slowly. Afghan government statistics for 2007 to 2008 puts women’s literacy at 12 per cent compared to 39 per cent among men. “Education is necessary for women to reach high positions,” Sarobi says.

But she adds education is not the only route to independence.

“Women – even if uneducated – can be empowered through economic independence as well. In my province they are working and earning independently – for example in the field of handicrafts.”

A recent survey of people’s perceptions released by the Asia Foundation in November 2010 showed the Bamiyan region had the highest rate of approval for women working outside their homes. However, it also suggested a steady decline in support across the country for women as public representatives. 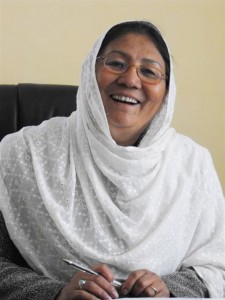 As a woman in such a high office, Sarobi is still extremely unusual. Despite considerable efforts by civil society organisations, women remain underrepresented in the cabinet and other top positions, and women’s activism is frowned upon by conservative leaders.

Civil society groups, which have been campaigning for a broad range of democratic rights, fear a resurgence of intolerant conservatism is feeding directly into the ongoing talks on reconciliation with the Taliban and that women will pay the heaviest cost for a negotiated settlement.

“The situation is very different from what it was eight to 10 years ago. But concerns remain,” Sarobi says.

“In the current process of reconciliation and reintegration [with the insurgents] it is still not clear what this means for women. I am concerned about whether they [the insurgents] will accept the constitution and women’s rights. We are also witnessing an increase in violence against women.”

Sarobi ironically rates discrimination against women as a factor in her success.
Her first experience of this prejudice was in her school years. The sudden death of her mother when she was 13 left her as the eldest child in a single parent household headed by her father.

“The first stage of my childhood was very tough. My father – like all other men in Afghanistan – preferred my brothers to me.” This neglect pushed Sarobi to try harder. “I wanted to show my father I could do better than my brother. I would work hard and come first in class all the time.”

Her uncle, who returned from the Soviet Union with more liberal values about women’s education, encouraged her to go to university.

“My personality changed at this time,” she recalls.

“I became active in student politics, against the Russian invasion. I was a very emotional person then. Later, in middle-age, I learnt it is not good for a woman to be so emotional. I learnt to be strong, not to cry. After the Russians, the mujahedeen were fighting with each other. I was preoccupied with surviving – I had started a new life with my family, I was a mother concerned with saving her children.”

Her vocation as a pharmacist came to a quick end with the civil war and the advent of the Taliban. “All women were supposed to stay inside their houses. I could not do that, so I left for Pakistan,” she recalls.

There she became involved with NGOs working with refugees, in particular teaching girls in refugee camps. Post 2001,pr following the US military intervention in Afghanistan, she was made Minister of Women’s Affairs – the second woman to hold the post – before becoming governor of Bamiyan four years later.

Her appointment and survival in the post have a lot to do with the province, she believes, adding “it would have been impossible” for her to govern in provinces such as Helmund or Kandahar. These provinces in southern Afghanistan have rigid social mores further exacerbated by the conflict. Bamiyan, in the central highlands of Afghanistan, has a majority of Hazaras, an ethnic group believed to be descended from the Mongols. As Shias, they are less conservative in their attitude towards women than either of the country’s two more dominant communities, the Tajik and the Pashtun, who are Sunni.

However, Sarobi still had to struggle to be accepted. When she first arrived in the province as governor, a junior male official took the ceremonial salute instead of her. That has since changed and the ‘wali’ (the Dari word for governor) is both feared and respected. In a country where the ongoing conflict provides many excuses, Sarobi is the only governor who fines people for arriving late or using their phone during meetings. Her working style is hands on, whether it is climbing up the steep wooden scaffolding to inspect the ongoing restoration of the Buddhas, the colossal 6th century statues blown up by the Taliban in 2001, or ordering the demolition of shops along the Band e Amir lakes to prevent pollution.

“Earlier people did not believe a woman could hold a position like this,” she says. “I have been a successful model because I was able to institute good governance system in my province. The people are happy with the development being brought to the province. They are also happy because I am not linked to any party or the mujahedeen- so they feel free (confident) to talk to me without fear. Maybe I have survived in my position because I am still the only female governor!”