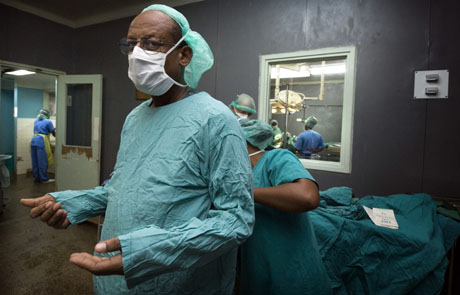 With AIDS taking the lives of healthcare workers – and destroying the morale of those left behind – Africa’s public health systems are under acute strain.

“We are losing our health care workers because they are leaving Africa for greener pastures. We want Africa green enough,” shouted Dr Phello Lethola from Morija Hospital in Lesotho.

Dr Lethola was among tens of health care workers and activists who, on Thursday, held a demonstration at Centro Banamex where AIDS 2008 is drawing to a close.

Countries in Africa are facing a public health meltdown as hundreds of public health workers succumb to the AIDS pandemic, or are fleeing the region in search of better pay. And as if this were not enough, health care infrastructure is way below the required standard with rural communities in some countries struggling to cope.

This situation poses a great challenge as medical professionals are lost to HIV and AIDS faster than they can be replaced. “In South Africa for example, 1,896 nurses qualify into the profession each year, while approximately 2,745 succumb to AIDS”, says Morolake Odetoyinbo of Positive Action for Treatment (PATA).

A study by Olive Shasana, President and CEO of Human Sciences Research Council in South Africa, highlighted that HIV and AIDS has led to high absenteeism of health workers due to illnesses, and low staff morale due to pressure of work while covering up for sick work-mates.

The issues of occupational exposure to HIV infection among health workers can not be overlooked. In many countries for many years health care workers have become infected with HIV as a result of their work. Although this accounts for a smaller proportion of the infection cases, it is still significant.

The situation is partly solved by the availability of post exposure prophylaxis. However, not all health workers access it as they do not feel comfortable taking the HIV test that would qualify them to get the prophylaxis.

Dr Mkhize explained that, in human resources terms, the South African government spends millions of dollars each year to train nurses, but this investment is being lost to the HIV epidemic.

“When they finish training, instead of getting value for the money spent in training, they get sick from AIDS, sometimes missing work and dying without replacement. That translates to resource waste. As more and more people are going to need ART, the future is bleak as the very centre of ART is facing extinction,” said Dr Mkhize.

She said achieving universal access to treatment will remain a pipe dream unless there are programmes aimed at addressing HIV and AIDS among health workers so that the few nurses who remain in the health sector are retained.

Lesotho TB-HIV doctor Pheello Lethola said the best way to address the situation would be for donors to avail funds for salaries in order to retain health care workers.

“Otherwise, the ARVs will be stuck in the dispensaries with no one to dispense them as all health care workers would either have left the country or died,” said Dr Lethola.

Martha Kwataine, who heads the Malawi Equity Network, a human rights organisation, who participated in the march said ,”this demonstration is targeted at multilateral donors like the IMF and the World Bank because they restrict our government budgets. This has caused our health workers to flee their countries,” she said.

Meanwhile, health workers who continue to work in the system face high levels of discrimination from both patients and co-workers.

“I was working as a psychiatric nurse and we had an HIV positive patient. The nurses working with me were really worried about looking after him, and they made some really negative comments … It made me feel so scared…What if they knew about me? I just couldn’t be open about my status at work,” said a PozFem UK member.

“It is unacceptable that health workers continue to suffer stigma in their places of work,” said Morolake Odetoyinbo of the Nigerian Positive Action for Treatment Access (PATA). “And yet, they are supposed to be at the forefront of the fight against the HIV and AIDS pandemic, imparting information to the communities they serve.”

Yale University professor, Gregg Gonsalves, said the continuing migration of health workers should be addressed in the long term but called for urgent short term strategies.

“We need to invest in task shifting now to deal with the immediate crisis [of the shortage in health care workers]. We can’t rely on a physician-driven model for providing antiretroviral therapy. There are simply too few doctors to go around,” he said.

“This means nurses, clinical officers, community health workers and even non-clinical staff need to take on activities they have never been asked or allowed to do, such as allowing nurses to prescribe ART. We need to move beyond the resistance of governments and professional societies –  stop talking about this and make it happen.”