The clinic in the township of Chawama on the outskirts of Lusaka does not look promising at first glance. Paint peels from the walls, open drains in the street emit a rancid smell and the area is crammed with chaotic housing compounds.

But Aliness Munyanta, a volunteer peer educator in the area, only has praise for it. “Don’t let the surroundings fool you,” she says as she secures her baby firmly to her back with a cotton sheet. “This clinic saved my baby’s life. I lost two children to AIDS before they turned 11 months. I thought I had been bewitched by my mother in law,” she adds, testament to widespread beliefs in witchcraft in Zambia.

Today Munyanta, 36, is on her way to the clinic for a regular ante natal check-up. Her daughter, now 20 months old, is due to get a measles vaccination. 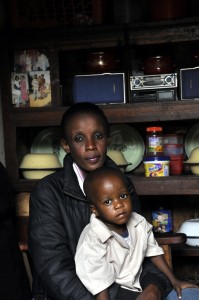 Six years later Munyanta fell pregnant again. “Things were not good at home, my husband began to stray saying I was cursed. My mother-in-law said I should not live with the family because I was diseased. The neighbours too began to shun me. Stigma was very high then.”

However, by this stage the Zambian government had begun rolling out free antiretroviral treatment. From a pilot scheme in 2004 which reached 10,000 people, by 2009 64 per cent of 440,000 people needing treatment were on ARVs.

During her pregnancy Munyanta was given AZT, a drug given to women to help prevent mother to child transmission.  After the birth her daughter was given anti-retroviral therapy for six months, after which she tested negative as her antibodies wore off.

“I thought I had been given a miracle,” says Munyanta.

“You cannot imagine how elated I am. I just thank God because there are so many women who do not have my fortune.”

While Munyanta’s experience reflects a turnaround in the fortunes of many HIV positive people in Zambia, a trip to the clinic shows there is still a long way to go in providing testing, treatment and counselling across the country.

The queues for ante natal services are long. It’s the only clinic in the area that offers comprehensive ante natal care. There is only one midwife and one nurse on duty. The women patiently wait their turn. They pass the time discussing “this disease”. Some are open and say they are HIV positive others say they are not, much to the murmurs of disbelief from their friends. The conversation is stilted – it’s taboo to talk about pregnancy (lest you bring bad luck) and even more so to talk about it with strangers.

“Stigma and denial are still high,” says the nurse, Suzgyo Banda. The clinic tries to offer confidential counselling and testing but it is not easy as space is at a premium, so the counselling room leads off the main waiting room. The period between testing, counselling and getting medication is long, so after a while some of the women get fed up and leave.

“But it’s not as bad as before,” Banda says. “We get some mothers coming with their husbands. We have arranged with some bus services to offer rebates to couples coming for voluntary counselling and testing so we are seeing a lot more clients. It’s a far cry from before when a woman would carry the burden of the disease alone, afraid and in secret.” 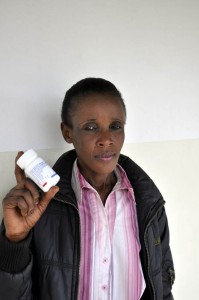 Munyanta’s story is similar to many women in Zambia, where HIV and AIDS is said to have a female face. Although the epidemic has spread to all parts of Zambia’s society, rich and poor, young women and girls have been particularly vulnerable. HIV prevalence is nearly four times as high among young women aged 15 to 24 as that of men of the same age, according to UNAIDS.

There are a number of factors resulting from gender inequality and poverty that contribute to this higher prevalence among women. As well as being biologically more vulnerable to HIV infection during unprotected sex, women are often taught not to refuse their husbands sex. In a 2008 behavioural study, 15 per cent of women reported forced sex. In addition, women tend to become sexually active younger than men, who tend to be at least five years older and may have had several sexual partners. There is also a lack of education and opportunities for young women.

“When a man comes home it is very difficult for a wife to say you have to use a condom. She’s putting her marriage at risk,” says Rosanna Price-Nyendwa, programme director at CHAMP (Comprehensive HIV AIDS Management Programme), a local NGO which works with private and public sector organisations to extend their existing HIV/AIDS programmes to the wider community.

With an HIV prevalence of 14.3 percent among adults aged 15 to 49 years old, Zambia is one of the worst-affected countries in all of sub-Saharan Africa. Zambia’s first case of HIV was reported in 1984. By the early Nineties it was estimated one in five people had been infected with HIV yet politicians were reluctant to talk about it or admit the full scale of the epidemic.

However, in 2002 the Zambian government formed the National HIV/AIDS/STD/TB Council (NAC) and in 2004 then President Mwanawasa declared HIV and AIDS a national emergency. He promised antiretroviral drugs to 10,000 people by the end of that year and a further 100,000 by the end of 2005. According to the UNAIDS 2011 report published this month, between 70 per cent and 80 per cent of those who need treatment, is one of the biggest changes in Zambia’s HIV epidemic. 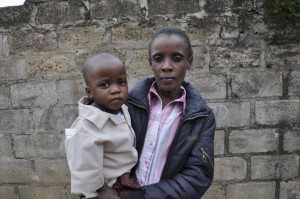 Free antiretroviral treatment has been one of the biggest changes in Zambia’s HIV epidemic. Because being HIV positive is no longer a death sentence stigma around the disease has started to decline.

However, researchers and health workers repeatedly highlight sustainability of treatment as a major challenge.

For example, while the government provides free services to prevent mother to child transmission (PMTCT) of HIV, only about 36 per cent of women taking the treatment complete the course, according to Zambia’s Ministry of Health.

One of the biggest challenges for people living with HIV in Zambia is their lack of access to good nutrition. If ARV drugs are taken on an empty stomach they can have side effects such as nausea, vomiting and dizziness. In addition, good nutrition is required to help the body rebuild its immune system. Other challenges include the long distances many people, especially in rural areas, face getting to ARV therapy centres, as well as shortages of ARV drugs.

Munyanta can attest to how difficult it is to access and stay on treatment. She has to walk to the neighbouring township to get water which she has to guard closely lest other members of the family drink it and she has nothing to take with her medication.

She is among the approximately 67 per cent of Zambians who live below the poverty line. She often does not have enough food to take with her medication.

“You just have to think of the end goal otherwise you can give up,” she says. “I just had to stay positive.”

Munyanta’s baby is off the medication but she has continued, keeping her viral count low and understanding that while she is no longer infectious, she should still practice safe sex.

However, only 28 per cent of Zambians aged 15 to 49 know their HIV status, according to UNAIDS.

“Those [who have not been tested] are the ones we need to worry about,” says AIDS activist, Felix Mwanza, “because HIV positive people are generally careful about their sexual behaviour; those that don’t know continue to be reckless.”

“For all our efforts in the last 20 years, all we have managed to do is to contain [the HIV virus],” he adds. Mwanza is coordinator of TALC (Treatment and Advocacy Literacy), a group of member organisations formed in 2005 to lobby for equitable and sustainable access to HIV treatment, support and care in Zambia.

“We have more people on treatment which is good, but that means we have also raised the risk of treatment failure,” he says. “People get fatigued from taking medication, the virus has also adapted and become more resistant.  We need to start asking ourselves how we sustain this treatment.”

He says that while prevalence has stabilised, the main drivers of the HIV pandemic have not changed over the years.  These are still multiple and concurrent sexual partners, low and inconsistent condom use, low levels of male circumcision, labour migration, high-risk behaviours among sex workers and transmission from mother to child.

“[We need to] look at the areas that most affect us,” he says.

“We have a disproportionate amount of women infected, so we should channel more resources there. We have a problem with behaviour change, so more funding should go there. Treatment is on course so perhaps the focus should go on other areas. All I am saying is that our problems are now more specific not general. If we continue to treat HIV and AIDS as a total, we will continue just containing it rather than getting rid of it.”

As Aliness Munyanta prepares to leave the clinic, her daughter’s vaccination completed, she reflects on the changes that have come about in her life in just a few years.

“I am poor, not educated and lacking in so many basic things that other people take for granted, but somehow I have managed to overcome all and have a healthy baby.” She has a message that she now strives to share with others: “It is possible even if you are HIV positive to have a normal life. Just take control of your life, go to the clinic, seek help and refuse to be defeated.”

In 1990 Winstone Zulu became the first person in Zambia to publically admit he was HIV positive. Although the virus was already ravaging southern Africa, politicians refused to speak about it and people were too scared to be tested. So he went on Good Morning, Zambia, the country’s most popular television show and told the nation that he was HIV positive.

Winstone became one of Africa’s foremost HIV and AIDS activists, helping shape the global fight against HIV and AIDS while delivering the message that ordinary people could get the virus and even look healthy while they had it.

Winstone Zulu died in October from complications of AIDS, shaking the international community of AIDS activists.

However, his example and his work have helped to transform the lives of hundreds of thousands of Zambians. Twenty one years after his announcement on breakfast TV, Zambia is a very different place to be HIV positive.

“[In the Nineties] there was a lot of stigma and HIV felt like a death sentence. If you were diagnosed there wasn’t a lot that could be offered,” recalls Dr Virginia Bond, programme director at Zambian NGO, the Zambia AIDS Related Tuberculosis Project (ZAMBART).
Since then the government of Zambia has rolled out free antiretroviral (ARV) treatment. With treatment has come hope, helping to reduce stigma.

Francis Tembo, 55, an HIV positive peer educator for The Centre for Infectious Disease Research, says: “Zulu demonstrated that you can live for a long time provided you change your lifestyle. He also demonstrated the importance of knowing one’s status as this leads to treatment, care and support.”