You are here: Home » Blogs & features » Print features » Beggars must be choosers

Beggars must be choosers 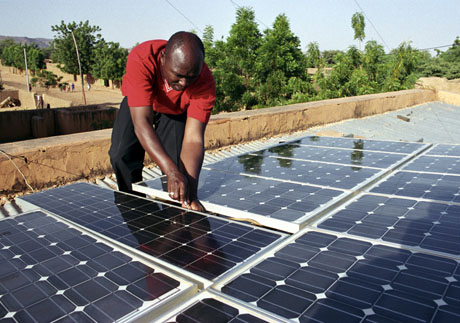 A man maintains the solar panels on top of a radio station in Mali. Namibia might be able to take advantage of the amount of sun it receives to generate more energy with solar panels too / Crispin Huges - Panos Pictures

The climate games are back in town. This time countries gathered in Bonn’s Maritim hotel for another round of tedious negotiations. The differences between delegations are about as numerous as there are contentious items on the agenda.

The United States commandeered several suites directly above the conference hall to direct its considerable efforts in getting the best deal possible, for America.

Smaller countries, like Namibia, have to settle for a couch with a strategic overview of the hotel’s lobby. It doesn’t mean the delegation’s position is any less calculated.

The Land of the Brave, as Namibia is known, is in a predicament. One of the driest countries below the Sahara, climate change will worsen desertification and deteriorate an already alarming water shortage.

But as a middle income country it doesn’t automatically qualify for large amounts of adaptation funding. Nor can a delegation of just six people hope to cover every single meeting.

“For countries like ours it’s important to pick the meetings where we have a vested interest and defend our case,” says Namibian UN ambassador and lead negotiator Kaire Mbuende.

“It’s also a matter of how responsive you are in putting forward proposals for funding, emphasising your track record on handling projects and the capacity to absorb funding.”

Namibia, according to Mbuende, makes it a point to demonstrate co-financing of projects from ministerial budgets, which demonstrates a level of commitment that gives it an advantage.

The other set of meetings the Namibians follow with interest are those around technology transfers and renewable energy. Granted progress is slow, but the outcomes could potentially transform a net-importer of ‘dirty’ electricity into a regional provider of clean energy.

If ever there comes a time that sunlight becomes a serious commodity – not an entirely unrealistic vision – Namibia, with over 300 sunny days a year and situated in an energy starved corner of the world, is in a pretty good position.

According to negotiators, there’s been a bit of a split in the Africa Group this week. South Africa, which faces a legitimate claim to curb its emerging emissions, has been trying to appease it trade partners in the US, Europe and the BASIC group.

The rest of the continent has been left behind. Both in Copenhagen and since then, Africa hasn’t really been able to get a good deal on its own behalf.

Getting a deal for Africa is hampered by disagreement over what should take priority in a continent with widely varying needs.

“Like pygmies we argue over which of us is maybe a bit taller than the other. But it’s ridiculous. In the end we are all still pygmies,” said a friend this week with regard to Africa’s relevance in the talks.

Which, with all respect to the pygmies, is true.

Much like the marginalised forest dwellers themselves, Africa is dragged into the discussion when a point needs to be made, or a colourful, dramatic example is called for.

Its enormous potential as a net carbon sink and as a testing ground for developing economies on a clean carbon path, however, is not often enough acknowledged.

For that matter, it’s not even promoted by the countries themselves.

Africa should learn from Bangladesh, which has been extremely vocal in its climate change politics and initiates projects from its own coffers. Not just because it’s the right thing to do, but also because it knows the investments will pay for themselves in the end.

Namibia seems to have embraced this thinking, as evidenced by its pro-active stance and by choosing to focus its scarce resources on a few key issues.

Servaas van den Bosch is a freelance journalist based in Namibia, specialising in environment stories. He attended the Bonn climate change summit as a Climate Change Media Partnership fellow. The opinions in this blog feature do not necessarily reflect the opinions of Panos London.