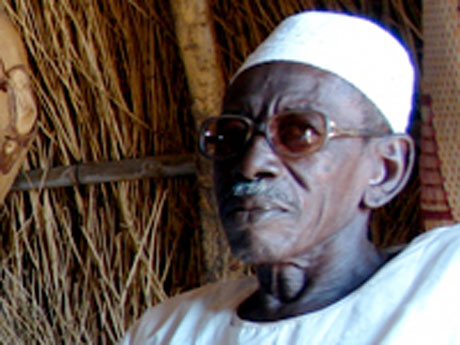 Sudan: El Nour Abd Elrasol has felt the impacts of the encroaching desert all too keenly

When the desert crept into the village of El Ihemrat in Sudan’s Northern Kordofan region, it claimed El Nour Abd Elrasol’s wealth, his eyesight and his future.

El Nour Abd Elrasol is nearly 70 years old and was born in El Ihemrat village, the son of one of the largest families of the Kawahla tribe. His family founded the village when they settled in the region about 200 years ago. When El Nour grew up, El Ihemrat was surrounded by vegetation and water and there was a wealth of animals: camels, sheep and goats, and the finest cows capable of producing an abundance of milk. Rich fields yielded sesame seeds, groundnuts and vegetables.

His father owned large herds of animals and after leaving school El Nour became a wealthy herder, established a family and became a father of six daughters. But things were changing in his home area. Sand dunes moved quietly but steadily towards El Ihemrat, and then they surrounded it, isolating it from other towns and life. The state of North Kordofan was being affected by the phenomenon of desert creep.

After severe droughts in the 1980s and 1990s, El Ihemrat changed beyond recognition. The formerly green village became a pile of earth and sand. Its inhabitants moved to live on top of the sand dunes and animals died because they had nowhere to graze. Life became hell. Poverty crept into the village along with the sand, and families began to migrate to urban areas.

But El Nour refused to leave the land of his grandfathers. After losing all his animals, he explains, he had no choice but to leave the family behind and look for work in El Obeid city. He had six jobless daughters to feed, as well as his wife and his 97-year-old mother.

As he tells his story, the wind blows sand into his face and he rubs his eyes in irritation. “I worked for the company of Awad Omer Abdel Salam,” he says, “which exports animals from El Obeid. From there I sent some money to the family. Once a month I managed to visit them. As time went on, my eyes started to hurt badly from all the wind and dust. Tears ran down my face continuously, my eyes looked red and inflamed. My eyesight worsened. The optician I visited gave me eye drops and prescribed spectacles. I did not feel better with the spectacles even though they cost a lot of money.”

When El Nour learned that a team of opticians from Khartoum were visiting the town of Khoi – about two hours’ drive away from El Ihemrat – he travelled to meet them. “The doctor I saw reprimanded me for not using the eye drops any more. He told me to continue using my spectacles and the drops for a whole year. He would then return to Khoi and inspect me again.”

Caught in a vicious circle

Now El Nour’s bottles of eye drops are empty. His right eye is now nearly blind and he has only about 30 to 40 per cent capacity in his left eye. “In the evening I can’t move without a torch or the help of my daughters. During the day I can only see the shape of things, not the details,” he says. Most days, he now suffers from a headache as well. He cannot afford to replace his eye drops because he has no income, but he cannot work because of his severe eye problems – creating a vicious circle.

Every day, he explains, his wife buys vegetables from a small farm near the village and sells them in distant villages; from the money she makes, the family buys flour, sugar and other basic commodities. If she can’t get hold of vegetables to sell, the family needs to borrow.

“I learned the other day that a team of doctors will visit the Kuwait Hospital in El Obeid. I really would like to see them,” he says. “But I doubt they can operate on my eyes because they are now extremely inflamed. Yesterday I went to collect some wood to sell so I could buy new medicine. One of the village boys accompanied me. I collected some wood and sold it; but when I returned to my house some guests had arrived. I spent the money to host them.”

Eye problems and eye diseases are common in the area because sand particles injure the eye cornea. Isam Hajj Al-Tahir, the director of the International Fund for Agricultural Development’s (IFAD) project for rural development in Bara, says desertification also increases allergies and malnutrition, putting pressure on the health system.

Abdul Hameed Moneim Mansour is Northern Kordofan’s minister for health. “The health situation in the state has severely deteriorated”, he says. “We did not receive money for our health budget, in fact the budget is no more than figures on paper.” There is an extreme shortage of medical staff and technicians, the minister explains. Many retired, left for the capital Khartoum or even left Sudan altogether. Others abandoned their profession.

Support from the Federal Government, he says, is urgently needed to address these problems in the health sector. “We are also desperately in need of four-wheel-drive vehicles that can operate in all this sand so we can reach remote places and treat people there. We need to take the burden off the town hospitals. They are currently under a lot of pressure, not only from our own people with all their health problems, but also from displaced people coming from Darfur which borders our region.”

In the meantime, Northern Kordofan tries its best to improve the health system with its limited resources, he says.

An agreement has been struck with Khartoum’s Mekka Hospital which specialises in eye treatment to establish a branch in Northern Kordofan. “The hospital agreed, provided it is given a plot of land to build on. An application in this respect has been handed over to the state governor. We have also asked the Federal Government in Khartoum to send us 10 specialist physicians.”

Even if staff can be made available, he adds, it sometimes does not solve the problem. “Recently, we transferred two doctors to Bara Hospital”, he says. “But the local authority was unable to provide them with appropriate housing and so they returned.”

And there is a plan to train nurses, the minister adds, but it will take three years for them to graduate. “Our problem is: how can we bridge the gap we have at the moment until then? We urgently need medical staff now. Our needs are serious and acute and it can’t really wait so long.”