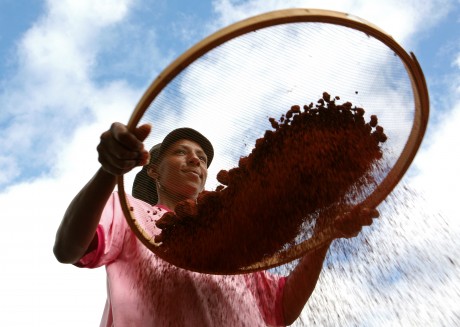 When the day begins at the brick factory, Sandra Ferreira de Souza climbs across the sand mixer and uses the weight of her whole body to push the heavy lever down to turn the machine on. If it loosens too much, she quickly grabs an iron pipe to avoid falling down. This is one of the many adaptive manoeuvres that this slight 27-year-old has developed to adjust to a business designed for men.

However, the sand mixer and its unwieldy lever are nothing compared to the resistance she faces among male construction workers at commercial buildings where she raises walls and lays down flooring.

Thin and shorter than average, Sandra has a delicate face and long, hair that she styles in curled braids and purple hair bands. At work, she pulls her hair up and keeps it covered so the sand does not turn it “stiff like dreadlocks”. Whenever a construction worker makes fun of her long nails, Sandra fires back: “These hands work the same as yours, dear. Sometimes better.” And then she adds: “Men, what are you good for anyway?” This is one of her favourite lines since she finished building her own house, where she lives with her three children.

Sandra is one of 20 women who have learned the basics of the building trade, thanks to Lua Nova, a non-profit organisation that helps pregnant women facing high-risk situations such as homelessness, drug addiction and domestic violence.

She grew up begging for money at traffic lights in São Paulo, Brazil’s richest and most populated city. Her mother abandoned the family after her younger sister died at age four from stomach worms. Sandra moved into her aunt’s house, where she was again forced to beg for money and where she suffered beatings if she came home empty-handed.

The first time she became pregnant Sandra was 19; she received no help to care for her children. In fact, her aunt’s family made several violent attempts to sabotage her pregnancies. It was only while working as a maid that Sandra’s employer noticed her bruises and constant pain. She called a friend who worked at Lua Nova and told her Sandra’s story. By the time she went to the association, her cousins had kicked her, thrown boiling water on her belly and forced her to swallow Cytotec, a drug illegally used to induce abortion in Brazil.

Sandra’s story is no worse than most of the 60 women helped by Lua Nova, which means New Moon – a reference to the invisible potential of these mothers. While the women are pregnant, the association provides shelter in a quiet, rural area near Sorocaba, a city with half a million inhabitants 100km from São Paulo. Twenty-six women live at the shelter, while 34 live off-campus and continue to work on the income-generating projects the association provides. Sandra was 20 when she arrived to find a bedroom, a cradle, diapers, food and all the basic necessities for her children.

After giving birth, the women participate in income-generating classes. Sandra chose construction. She registered for the first class back in 2006, when male teachers from a well-known training school in Brazil were still arguing that women were incapable of learning the trade.

Raquel Barros, the psychologist who founded Lua Nova, managed to convince the trade school to give the women a chance. For the first few weeks, all the teachers did was joke and flirt with the women. Not only did the women meet resistance as they aimed at a market dominated by men, but they faced the social stigma of being single mothers learning a traditionally masculine trade in a Latin American city with a strong Catholic influence.

“In their minds, we will always be outcasts,” Sandra sighs. “The teachers were initially very impudent, but we now know how to deal with it.” Whenever they made sexual innuendos, Sandra reacted the same way as she once did on the streets. “When disgusting men would offer me money for sex, I would always give them the same answer: “If I wanted to, I’d do it for free, but I don’t.”

However, the women persisted, learning a variety of building techniques such as plumbing, painting, wiring and tiling. Meanwhile, Raquel built a brick factory as another Lua Nova project. The women began to make bricks for their future houses and sell the surplus to buy other materials. Once they had enough bricks, 16 women joined forces to build 20 houses.

New machines have been brought into the factory to speed up brick production. The idea is that the women sell the bricks and earn a portion of the profits. They already have five orders for a total of 60,000 bricks. The Lua Nova brick is eco-friendly. Because of their shape, the bricks fit together like Lego pieces and do not require as much mortar.

Four women have so far opted to become full-time builders. They are either employed by big companies or work as freelancers, depending on demand. Raquel says: “At first they were hired out of pity and were paid lower wages. Now, people are recommending their services because they are meticulous, extremely careful with the grouting and better organised than the men.”

Five of the 20 who did the course have moved to other income-generating projects offered by the association, such as bakery classes that feed into a professional bakery where the women share profits from the bread and cakes. There are sewing classes where the women make clothes for dolls.

Some of the women working at the brick factory are former drug addicts. Fabiana Gomes, 31, says: “My parents were drug addicts… My mother beat me and my father was a professional assassin. I was six the first time I watched him kill a man. I can still taste the potato chip I was eating when I saw it. I don’t want my children to go through the same trauma.”

Sandra has begun to think now about her next steps in life. “When I got here, I thought Lua Nova was paradise. All I needed was a house. Now I want other things. Now I know how to do it, I sometimes think about going to São Paulo and bringing together all those families living on the streets. I keep thinking I could change their stories like Raquel changed mine.”