You are here: Home » Blogs & features » Print features » Brazil’s media agenda: whose news is it anyway?

Brazil’s media agenda: whose news is it anyway? 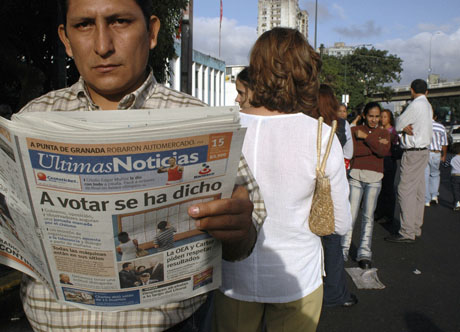 Brazil’s media giants increasingly import their news from international agencies – bringing with it the world view of the global North. Natalia Viana calls on her fellow Brazilian journalists to adopt a new perspective, with greater public involvement.

Brazil has a highly concentrated media industry: six family firms control 80 per cent of the television network, seven out of ten magazines across the country are run by a single group, and just two newspaper corporations in the state of São Paulo have a tenth of the national market share.

At the same time, reduced investment in foreign coverage and a decreasing number of Brazilian correspondents means the country’s global news agenda is dominated by stories from international agencies.

More and more articles are taken from the news wires, translated in their entirety and reproduced across the press. All major newspapers print the same international stories, with exactly the same information. In doing so, our reporting fails to address the interests, views and concerns of most Brazilians.

But the debate about how the news is made – or should be made – is hardly ever brought into the public arena. As a result, the journalistic process remains out of public reach – it is done ‘for them’, never ‘with them’.

Recently I was involved in an episode that perfectly illustrates this divide between Brazil’s media producers and the people it serves.

The story starts in London, where I was doing a weekly shift at The Independent – one of the UK’s main quality newspapers. Before returning to Brazil, I asked the foreign editor what kind of stories he would carry from South America. He got straight to the point:

“You know the old saying: a thousand Peruvians are worth the same as ten French people. So only if it’s a big story, a big disaster…”

I was amazed by his response. Partly because it revealed a prejudice – or ‘criteria’ – that I did not expect to find at a respected newspaper. But what really struck me was that, by merely reproducing stories that come from outside agencies, Brazilian news replicates the same ‘criteria’.

His comment drove me to write a vehement opinion piece about how Brazil’s media is simply mirroring foreign prejudices by sourcing stories from the global North.

My article was published on three websites: Caros Amigos, a monthly online magazine dedicated to politics, and two sites about the media industry aimed at professionals. In just three days, over 50 readers submitted comments to the Caros Amigos site, sparking a wider debate.

More than 20 readers thanked me for revealing what I had heard. Some appreciated that I had raised the issue in the first place: “The most interesting aspect of this article is its theme. Many of us readers rarely think about how the news we receive is put together,” said one.

Around a third of the readers were shocked, expressing pure indignation:”While we keep thinking that ‘this is the way it is and there is no way out’, our vision of the world will continue to be manipulated by those who are only concerned with what they want us to know, not by what we need to know.”

Despite such criticisms levelled at the media, only a few journalists contributed their views. The most remarkable response was from an editor at a major newspaper in São Paulo:

“The space for international news on major newspapers is getting smaller and smaller,” he said. “I don’t like this situation, but it’s been established for two decades and is only getting worse.”

“Whatever we think, this is the situation and we must adapt,” he continued. “This type of debate is only fit for university students to discuss in bars. The idea that ‘we will change the world’ has no basis in reality.”

His sense of apathy is seen throughout the global media industry, perversely formed of several players who are seemingly unaware of the effect of their own work – and are quite uninterested in the chain of news delivery it sets up.

The UK editor who gives more space to stories from Europe assumes his readership is more interested in what happens on their doorstep. A Brazilian editor who publishes the same stories – in the face of, say, poverty in neighbouring Peru – argues that such articles have a bigger impact. And the journalist who barely re-writes the story when translating it into Portuguese simply says “I’m doing what I am told to do”.

That’s why the view of the São Paulo editor is not an exception among media professionals in my country. There are very few journalists who dare to question the structures, expose wrongdoings, or consult the public as to what is in its best interests.

They are out of step with public opinion. In December 2007, a BBC World Service survey revealed that Brazilians are more concerned about media concentration than citizens of any other country. From a sample of 1,500 respondents, eight out of ten are worried that private monopolisation of the media will lead to political bias.

The survey, conducted with over 11,000 people across 14 countries, also showed that Brazilians are the most interested in taking an active role in the news process: 74 per cent said they wanted their views to be heard in what makes it to the news agenda.

Clearly, the readers who responded to my article reflect a much wider sentiment. In my view, media professionals who refuse to acknowledge this are missing the opportunity to promote positive change in Brazil’s media landscape.

By challenging media concentration, journalists and editors could lead the way to a more democratic news service that reflects the needs and interests of the Brazilian people.

This is why it’s so heartening to see that citizen journalism is beginning to take hold in Brazil. The public is organising its own media services via community radio stations and online platforms. On top of that, there is a growing civil movement lobbying for changes to media laws that would encourage more participation and transparency in the industry.

These efforts are forging the future of our media – without the media. Instead of ignoring such movements, media professionals in Brazil should learn from them. After all, anything that leads to better journalism is something all journalists should support.