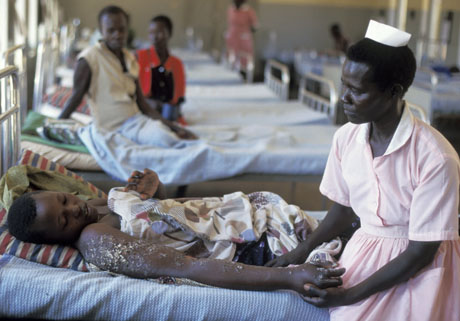 A nurse attends to an HIV patient in Zambia. A new piece of research says that health workers in Sub-Saharan Africa are under intense pressure / Giacomo Pirozzi - Panos Pics

The health systems of Sub-Saharan Africa are being undermined by an exodus of medical staff. A new study from Zambia, led by an international team of doctors and researchers, reveals that staff burnout is fuelling the crisis. It shows that even though access to HIV treatment has rapidly expanded, the number of trained staff has not kept pace, meaning that delivering effective HIV care is proving difficult.

Too stressed to work

An international team of doctors and researchers investigating burnout among health staff in Zambia discovered that clinical officers in primary care centres in Lusaka reported seeing 100 patients a day or more. Their findings are published in the journal Human Resources for Health. “We were surprised to find the severity of occupational burnout amongst clinical staff,” says study author Dr Gina R Kruse, a Resident at Massachusetts General Hospital in Boston, USA.

Of those that were surveyed, over half reported they felt exhausted by the long hours and heavy workloads. “One quarter are so stressed, they cannot manage to go into work once a week,” described the report.

The study says burnout is characterised by exhaustion, lack of sympathy with patients and ineffectiveness. Health staff from 13 centres which provide HIV care, who took part in focus groups, told researchers they were frustrated by low salaries and benefits As a result many have second jobs that further fuel their exhaustion.

Figures from the World Health Organisation show the worldwide average is 9.3 health workers for 1,000 patients; in Sub-Saharan Africa though the figure stands at only 2.3 health workers to 1,000 patients.  According to the report most healthcare workers stayed for only between one to three years before moving on. This turnover increases the work load on those left behind.  This has important implications on patient care, as occupational burnout coupled with low staffing levels have been associated with a decline in the quality of care.

Virginia Bond, another of the study’s authors, and director of Zambia AIDS-Related Tuberculosis Project, is also concerned by declining care standards, adding that, “The high rates of occupational burnout in health care workers especially for those experiencing it on a frequent basis, contribute to attrition of the Zambian public health HIV treatment service.”

The survey also showed that almost half of clinical staff surveyed had failed to undergo HIV testing in the past year. One medical officer told researchers, “In the clinic the whole staff are confidential with a patient’s history, but when it comes to a clinical officer, the whole staff would be interested.” Fears over confidentiality were the main reason given by staff to explain the low testing figure.

Title: Burnout and use of HIV services among health care workers in Lusaka District, Zambia: a cross-sectional study

The study can be found at:

The study based on work by Evidence for Action