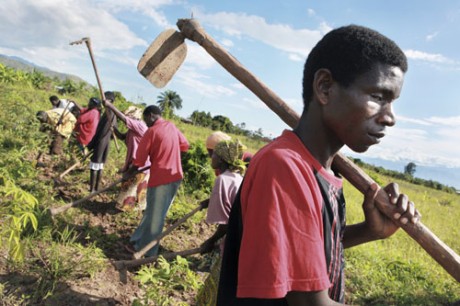 Burundi has seen conflict for the past four decades, and a new report suggests that land ownership issues could fuel future conflict / Dieter Telemans - Panos pictures

Land ownership issues among returning refugees in Burundi could fuel renewed conflict in the region if they are not adequately resolved, researchers claim.

Since 2002 more than half a million Burundian refugees have returned home and many have found their land occupied. The report, published last month by the International Refugee Rights Initiative (IRRI), the Social Sciences Research Council and the Rema Initiative, claims that resolving these issues is critical to achieving long-term peace in the region.

“Almost half of post conflict countries in the Great Lakes region [Burundi, Rwanda, Uganda, north-west Kenya and Tanzania, north-east DRC] return to war within ten years and many secondary conflicts break out over land disputes,” the study claims.

For the past four decades, Burundi has been plagued by civil wars, causing millions to flee to neighbouring regions.  The signing of the Arusha Peace and Reconciliation Agreement in 2000 marked Burundi’s path to peace and stability by approving a power-sharing agreement for the government.

Returnees want their land back

However, after the peace agreement was signed, large numbers of Burundians started to return home and access to land quickly became a critical issue. Around 95 per cent of Burundians depend on land as farmers, according to the report. Land is also intrinsically linked to a Burundian’s sense of identity and social structures.

A returnee, who originally fled Rutuna province in 1990, told researchers: “Your identity depends on the family land; you have an origin and people will say: ‘So and so comes that area’.”

Under Burundian land law, the ownership of land that has been peacefully occupied for 30 years cannot be challenged. This has meant those in exile since 1972 are now no longer eligible to claim back their former land.

In an effort to move returnees out of transit camps, the UNHCR and the government of Burundi have started to relocate people into what are known as ‘peace villages’.

These designated areas of land are for Burundians who have returned to find their land occupied by government or corporate ventures, or who do not know where their families originally came from.

Although peace villages are seen by the government and the UNHCR as a means of integration, reconciliation and resolution of land problems, the study found that many refugees do not share this opinion. In fact, interviews with returnees revealed they foster feelings of injustice and resentment because the villages are seen as places for those who do not know where they belong.

The researchers interviewed 245 people primarily in Southern Burundi from June 2008 to July 2009. The interviews were with returnees – including those who fled in 1972 and in 1990 – as well as NGOs, government officials and UN personnel in Bujumbura, Burundi.

As one man told the researchers, “In this peace village, I still feel as if I am in exile – the refugee camp I was in was far better than this peace village. I do not feel I am a Burundian at all. At least if we were placed in a good place not in this desert, we were dumped in this useless place.”

Resentment may lead to conflict

“Those interviewed expressed strong feelings of marginalisation – both economically and socially,” says Dr Lucy Hovil, a senior researcher at IRRI and author of the report. “[This is] exacerbated by the fact that the villages are, in fact, mono-ethnic as only Hutus have moved there. This… served to increase notions of ethnic alienation.”

The report claims if proper compensation is not offered to returnees “there is a danger that resentment will build up, and that decisions that are currently accepted – albeit unwillingly – will become a source of future conflict.”

The report suggests policy recommendations to address these land issues. “Peace villages should be critically re-evaluated to see if our findings are unique to southern Burundi or if they represent wider notions of alienations”, says Dr Hovil. “Alternative forms of income-generation that are not solely dependent on land need to be urgently promoted.”