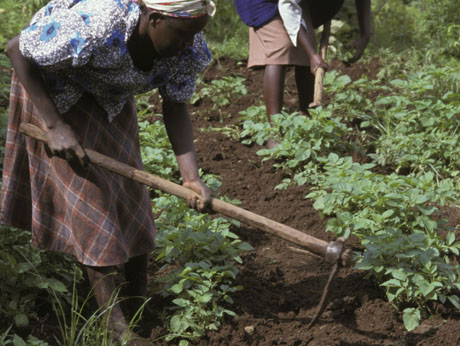 Kenya | Women tend their crops. The weather has become unpredictable over recent years making it difficult to know when to plant crops / Fred Hoogervorst - Panos pictures

As climate change threatens to overwhelm Kenya’s smallholder farmers, could traditional knowledge hold the key to their survival?

Mama Joyce Kanario Marete is a widowed farmer. Her modest home is located in the once lush green expanse of the Meru country in eastern Kenya. Falling towards the extreme end of the rain shadow of Africa’s second highest mountain, Mount Kenya, is her four-acre farm.

It is all she has. Since her husband died in 1990, Joyce’s life has revolved around scratching the earth to sustain her family and leave something for sale at the market. She lives on the farm with the families of her four grown-up sons, one of whom died of tuberculosis two years ago. “Life is tough for most of us farmers”, she tells me. At 66, she can see that fertilisers have not saved the land from exhaustion. It does not produce what it did a few years back.

But, she says, she is at least able to harvest if and when the rains come in time. But like her fellow smallholders, she no longer knows when the next long or short rainy periods will begin. The area’s climate has been changing at rates she cannot cope with. “For the third time in the last six years, we lost the entire crop and were forced to replant after the rains failed,” she says sadly.

All her life, Mama Kanario has relied on “traditional” knowledge of the weather patterns to decide when and what to plant. The long rainy season here in the Giaki area always began in mid-March and lasted until May, while the short rains fell in October and November. “We have always expected good harvests during the long rains and at least something to eat during the short rainy season”, Mama Kanario says. Until about 20 years ago, she could time the planting to coincide with the onset of the rains, but not now.

Mama Kanario is among millions of Kenyan farmers who depend on rain-fed agriculture and who base their decisions on long-held traditions. But over the last few years predicting the rains’ onset has become impossible. Often they plant as usual, only for the crops to fail because the rains did not materialise.

Mama Kanario has kept “hoping that God would send the rains in time.” But in three of the ten seasons over the last five years, she was left to uproot weathered young shoots of hybrid maize, groundnuts, cowpeas and pigeon peas – because the rains fell for only a few days, then disappeared for about a month. “Twice the seedlings looked healthy at first, but after the rains disappeared they all dried up and we had to replant”, she tells me. She says she lost as much as K.Sh 12,500 (US$156) in seeds and fertiliser each season.

For her, climate change is real and already affecting her family’s only source of food and livelihood. Last year was a double tragedy for Mama Kanario and her smallholder counterparts because the post-election violence that engulfed Kenya gave way to a prolonged drought in the better part of the year and well into the first three months of 2009.

Nor does science offer much consolation. For instance, the United Nations Environment Programme says temperatures over East Africa are now between 1.2 and 1.6 C higher than between 1951 and 1980. Glaciers on Mounts Kenya, Kilimanjaro and Ruwenzori have lost 82 per cent of their area over the last century. And fires in high-altitude forests that used to draw moisture from water-laden clouds – a process called fog interruption – no longer do so. Tea farmers now face a bleak future. Climate change is rapidly making growing areas unproductive. UNEP predicts that if the trend continues and temperatures rise by 2C, it will be a few short years before many of the tea-growing areas around the Aberdare Ranges, Mount Kenya, and Nandi Hills in the west become unsuitable for tea production. This would greatly affect Kenya’s K.Sh 19-billion-a-year (US$234 million) tea sector.

Smallholder farmers turn to one another

For Mama Kanario, that grim future may already be here. It takes a while for this proud woman to admit that she is now unable to feed her family, which is in dire straits because none of her sons or daughters-in-law is in formal employment. Paying school fees for one of the young lads left behind by her late son, Nicholas Muriungi, has been difficult. As she describes her predicament, it is clear that although adaptation to climate change is one of the hottest topics at global climate meets, millions of smallholder farmers in developing countries do not have, on their own, much financial wherewithal to mitigate against its gravest effects. “The crops you see are all I have…farming is all I know,” she says brusquely.

A staunch Christian, she hopes God will restore the land: “I know God cannot let us die… He will do something.” Besides God, smallholder farmers have realised the strength of forging a common front against drought and climatic uncertainty. Most have joined informal savings schemes. Mama Kanario is a member of Kibureni Women’s Group, saving what little she can with an informal micro-finance institution run by the local Methodist church, which she attends. “It is now possible for me to borrow as much as K.Sh 20, 000 (US$250),” she says, her face lightening for the first time in the interview. With the soft loans she buys food and seed when times are hard.

Today such savings schemes have proliferated in Kenya’s smallholder farming sector, mobilising hundreds of millions of shillings. “Registration of groups is now a principal activity and a veritable cash cow for the Ministry of Gender, Sports, Culture & Social Services,” says Peter Njoroge Karanja, the Chief Executive of the Kenya Federation of Self-Help Associations. To him, the self-help movement is the poor people’s way of dealing with the uncertainties and loss of income caused by climate change, unemployment, corruption and lack of support from the government.

Mama Kanario could tap water from the Kathita river (one of the tributaries of Kenya’s biggest river, the Tana) to raise crops. But though the river marks one boundary of her farm, she has been unable to save enough to buy the water pump she needs for a micro-irrigation scheme.

But could relief from the gravest consequences of climate change lie in African traditions, particularly those related to weather prediction? My question takes Mama Kanario aback. As she asks me to repeat it, I see she heard me clearly. But it might be too much to ask a woman who was taught all her life that embracing “modernity” and adopting Christianity meant – among other things – regarding rainmaking as a “backward” practice bordering on black magic or mysticism.

However, “rainmaking” is yet to die among some Kenyan communities. They are said to possess a special ability to perceive forthcoming changes in the atmosphere – the onset of cold or strong winds, or the movement of clouds – besides being able to identify plants, birds, insects and animals, which are more sensitive to changes in atmospheric conditions. Now a study by researchers from local universities, the Kenya Meteorological Department, the Kenya Industrial Property Institute and the National Museums of Kenya is recording and interpreting how traditional weather and climate prediction systems operate.

The researchers are working with the legendary rainmaking Nganyi people in western Kenya to record how they predict the weather by observing changes in air currents, the flowering and shedding of leaves of certain trees, changes in the behaviour of safari ants, and by listening to bird songs and the croaking of frogs and toads. The two-year, K.Sh 18.8 million (US$235,000) venture is funded by the International Development Research Centre, and will result in the setting-up of a disaster management institution and a museum.

Unlike Mama Kanario, science, it seems, is ready to embrace rainmakers. Dr Anthony Nyong, of the Centre, says the project will help shatter the myth that everything from traditional Africa was bad, as well as improving local communities’ disaster preparedness. He hopes the project will be rolled out elsewhere to develop an Africa-wide system of climate forecasting.